One killed, one injured in Kosciusko County crash 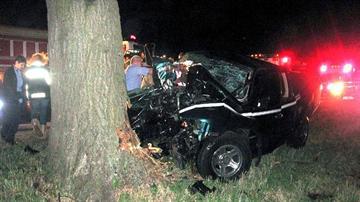 KOSCIUSKO COUNTY, Ind. – A man was killed and his passenger is in critical condition after a vehicle struck a tree on State Road 15 Sunday night.

When deputies from the Kosciusko County Sheriff’s Office arrived, they found a 2003 Dodge Ram had struck a tree head-on.

The driver, 37-year-old Jason S. Watson of Warsaw, was pronounced dead at the scene.

Passenger Ellen Myers, 22 of Warsaw, was taken by helicopter to the hospital.

She is in critical condition with injuries to her leg, torso and arm.

The Sheriff’s office Fatal Alcohol Crash Team is investigating the accident. They are awaiting toxicology lab results as required by law.