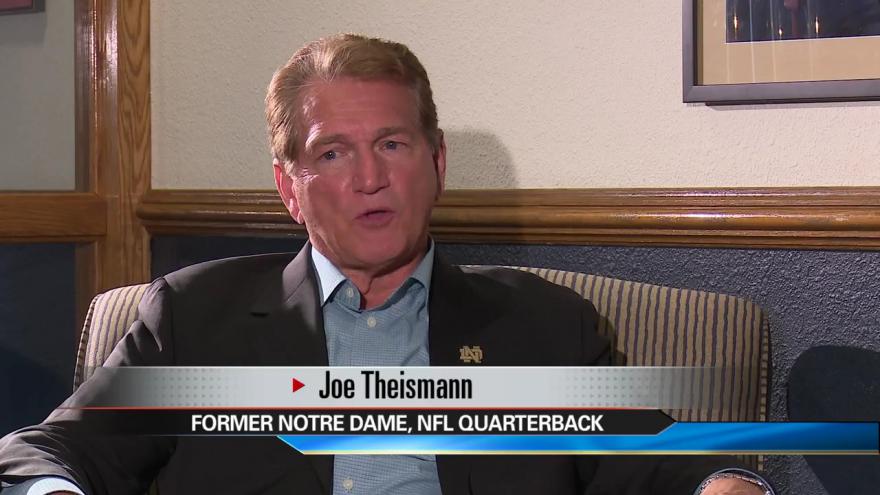 In 1982, Joe Theismann, the small in stature but big in personality quarterback out of Notre Dame led the Washington Redskins to the Super Bowl Championship.

That season Theismann threw for 3700 yards and 29 touchdowns. He earned the title of Most Valuable Player in the NFL to go along with his Super Bowl crown.

"There's only 31 of us who have won world championships as a quarterbacks. And now you're standing at the top of the mountain and you're thinking 'Oh my gosh this is unbelievable.' I never dreamt this would happen. The resume is what it is. I still look at my experience at the University of Notre Dame as the foundation for anything that I had ever accomplished, both personally and professionally going forward in my life because it's here that I learned those great lessons," Theismann said.

Theismann was not highly recruited out of high school. He had committed to play at North Carolina State, but late in the recruiting process he had an invitation to visit Notre Dame and that visit changed everything.

"A typical Notre Dame November weekend. A little chilly, a little cloudy at times. But the campus just had such an energy about it. I fly back to Newark, New Jersey I get off the plane with my father and he says to me, 'What do you think?' And I say, 'Dad, I got to tell you something. I have to go to Notre Dame.' He said 'Why?' I said, 'I can't give you a specific reason, I can only tell you that it feels right.' Fortunately for me, I listened to my gut so I wound up at the University of Notre Dame," Theismann said.

Theismann was an All American, a Heisman finalist and remains 5th on Notre Dame's career passing list with more than 4400 yards to go with his 31 career touchdowns.

But it was his antics off the field with friends at Notre Dame that is most special.

"It's all the crazy things of college, staying up at night. We used to have streakers. Which one of the nut cases was going to run through the campus in December naked? And you had a meeting for that. 'Ok, look, where are you going to put the Vaseline because Vaseline will hold all the body heat in.' We had all these stupid things we did," Theismann said.

Was he one of the streakers?

"I refuse to incriminate myself. I was up late at night and there were things that took place and that's where I'm going to leave it," Theismann said. "Let me just say this, Vaseline doesn't keep you warm," Theismann said.

After the antics and his stellar football career, Theismann was never out of the spotlight, including working as a commentator for Sunday Night Football.

Then Theismann's career took another turn and he found himself in a new role.

"It is fun. I've always enjoyed both sides of the camera. The first commercial I ever shot was a Cannon commercial," Theismann said.

He has played roles in in movies like Cannonball Run 2 and Love on the Sidelines, as well as TV shows like Necessary Roughness and Brooklyn Nine-Nine.

It's the combination of talent, personality and charisma that has made all the difference.

"If you can't laugh at yourself then you have a real problem and I have plenty of things to laugh at myself, I've done a lot of crazy stuff I think back and I smile sometimes and go I don't know how I'm still here first of all, secondly I can't believe I made that decision and third, you know what? That was fun," Theismann said.