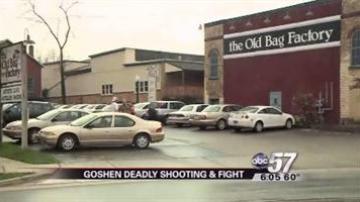 GOSHEN, Ind. -- One person is dead following a late night shooting in Goshen.

Around 11p.m. on Thursday, police said that a large brawl involving several people broke out on River Avenue. One officer reported hearing gun shots in the area while en route to the fight.

When police arrived on the scene one woman was found beaten. She was taken to the Goshen IU Health Center for treatment.

Officers were informed that the suspects involved in the brawl left the scene in a red truck which had been spotted by a policeman.

The suspects’ vehicle was found at the intersection of Indiana and Lincoln Avenue along with the individuals who were present at the River Avenue altercation. One occupant, John Staub, 26, was found dead from a gunshot wound.

At approximately the same time officers were dispatched in reference to other individuals in the area with gunshot wounds.

David Paul Goble, 29, suffered a gunshot wound to his leg. He was transported to the IU Goshen Health Center for treatment.

James Staub, 28, an occupant of the red truck, received injuries from broken glass and was later treated.

Police saw another vehicle drive by which had also been reported to be involved with the incident.

The second vehicle was stopped by officers in the parking lot of Linway Plaza. Four adults and one juvenile were in the vehicle.

This investigation led to the arrest of four people.

Daniel Heflin, 21, was arrested and transported to the Elkhart County Correctional Complex where he is being held on no bond for one count of murder and one count of attempted murder.

William Terry, 24, was arrested and booked at the Elkhart County Correctional Complex for one count of conspiracy to commit murder and being held on no bond.

Elisa Horton, 22, was arrested and transported to the Elkhart County Correctional Complex. Horton is being held on no bond and charged with one count of assisting a criminal and one count of obstruction of justice.

Dustin Saylor, 22, was arrested and booked at the Elkhart County Correctional Complex and was charged with one count obstruction justice.

The Goshen Police Department is still investigating the incidents.

Stay with ABC57 News as we continue to follow this developing story.