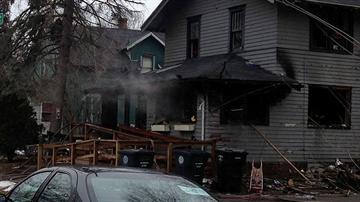 The home is at East Dubail and Columbia streets.

"I stay right down here on Dubail a block away and about ten this morning I'm lying in the bed and I heard was sirens and it was crazy,” said neighbor Rosa Loeza.

Half a dozen fire trucks and multiple police cars responded to the fire that nearly gutted the home.

"It came in originally as a residential house fire and then it was turned into a commercial fire because it's an apartment complex,” said Chico Rodriguez, fire marshal, South Bend Fire Department.

Only three people were inside at the time.

They were able to get out, but firefighters found three small dogs dead inside.

"When it was changed over to a commercial fire, we had about 12 pieces of equipment that responded plus some chiefs from downtown,” said Rodriguez.

Neighbors say the two-story home appeared overcrowded and in disrepair.

"They rent sleeping rooms for $75 a week and there may be 10 separate bedrooms up in there and they all share the bathroom and the kitchen. Anything could have happened because it's an older home,“ said Loeza.

The fire trucks left the scene by noon, making way for investigators to determine a cause.

"We're very early into our investigation so we really don't know where it started or how it started or anything,” said Rodriguez.

The damage includes busted out windows, demolished siding and a charred front porch and that's just what's visible from the street.

Investigators say they're still not sure what exactly caused the fire.

The damage inside totals over $50,000, equal to the value of the home.

One of the people inside the home was taken to the hospital with burns to his hands.