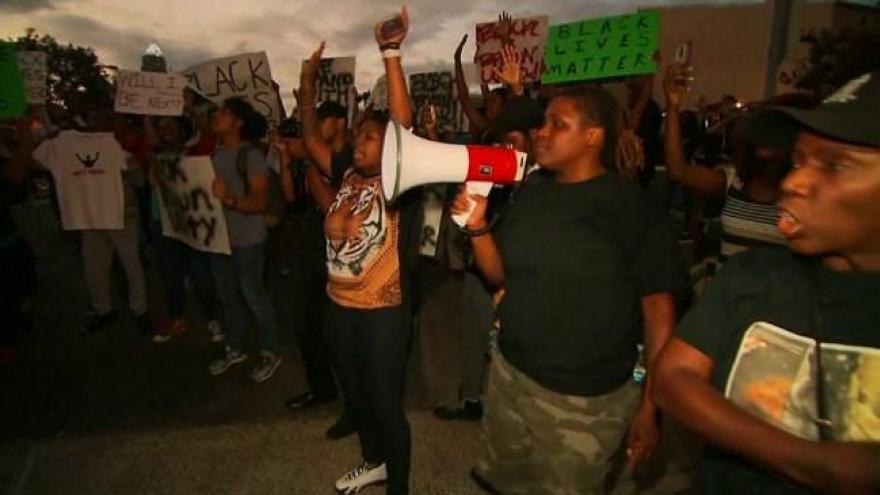 CHARLOTTE, North Carolina (CNN) -- One person was shot Wednesday during a second night of protests over a deadly police shooting in Charlotte, city officials said.

The person, who was not identified, is in critical condition and on life support, the city tweeted. Earlier, the city had tweeted that the person had died.

One police officer was injured, according to a city tweet. The officer was transported to a hospital with undisclosed injuries.

The riot and protests came on a day in which the city's police chief gave more details on the shooting that took the life of Keith Lamont Scott.

Chief Kerr Putney addressed the Scott family's claim that he was reading a book in his vehicle when police officers approached and shot him.

Mayor Jennifer Roberts, who spoke by phone with CNN's Don Lemon, called on demonstrators to heed calls from Scott's family and the NAACP to remain peaceful.

"Go home and tell everyone violence is not the answer. The investigation is ongoing, it will be transparent," she said.

Gov. Pat McCrory said the state is sending more troopers from the highway patrol to Charlotte.

"Any violence directed toward our citizens or police officers or destruction of property should not be tolerated," he said in a statement.

Many rioters and protesters dispersed after police fired tear gas before 11 p.m. ET.

Some apparently turned over trash cans and set the contents on fire. A few windows in at least one store were broken and one had "black lives matters" spray-painted on it.

Scott's family said he was unarmed and sitting in his car reading a book on Tuesday, waiting for his son to come home from school.

Putney said Scott exited his car with a gun, not a book. He said officers couldn't find a book at the scene.

"It's time for the voiceless majority to stand up and be heard," said the police chief, who is black.

"It's time to change the narrative because I can tell you from the facts that the story's a little bit different as to how it's been portrayed so far, especially through social media."

Putney said evidence and witnesses support the officers' claim that Scott was armed.

Officers repeatedly told Scott to drop his handgun, the chief said, but he didn't. Officer Brentley Vinson, who is black, then shot him.

The chief said he was not certain whether Scott pointed his gun at officers. Vinson, who was in plain clothes and wearing a CMPD vest, did not have a body camera. Three uniformed officers were wearing cameras, there is also dash cam recordings, and investigators are reviewing the footage, Putney said.

The mayor said she will be watching video from the incident on Thursday.

"You don't have to actually wait until a handgun is pointed at you because you're talking milliseconds of a decision as to whether you're going to pull your trigger, or that individual is going to pull their trigger," Roderick said.

Who is the officer?

Vinson has worked for Charlotte-Mecklenburg police for two years.

"It breaks my heart to see something like this happen, and I have a really hard time believing that Brent shot a man in his car while waiting for his (son) for no reason," Marsh said.

"Brent has always been a great guy founded on good morals. I find it very hard to believe that he would gun down an innocent man."

CNN briefly spoke to Vinson's father, Alex Vinson, on the phone. He asked for privacy and said no one in the family would be speaking to the media.

The officer has been placed on paid administrative leave, Mayor Jennifer Roberts said.

Moments after her father was shot, Lyric Scott started recording on Facebook Live, livid and screaming at officers on the scene.

"They shot my daddy 'cause he's black," she said. "He was sitting in his car reading a mother******* book. So they shot him. That's what happened."

Lyric, who keeps the camera on officers through most of the 31-minute video, said her father often goes outside to read a book.

About halfway through the video, Lyric apparently learns from a news report that her father has died. She starts screaming and crying hysterically.

On Wednesday, Keith Scott's wife released a statement saying her family is devastated and she called for protesters to remain calm.

"Keith was a loving husband, father, brother and friend who will be deeply missed every day," Rakeyia Scott said. "As a family, we respect the rights of those who wish to protest, but we ask that people protest peacefully. Please do not hurt people or members of law enforcement, damage property or take things that do not belong to you in the name of protesting."

The Charlotte case is the latest in a series of controversial shootings of black men by police. Protesters have been demanding justice and an end to police brutality for months.

Crutcher's father, the Rev. Joey Crutcher, said the overnight protests in Charlotte are "just a continuation of the same thing over and over and over again."

"They have once again highlighted -- in the most vivid and painful terms -- the real divisions that still persist in this nation between law enforcement and communities of color," Lynch said.

She denounced the violence that erupted in Charlotte.

"Protest is protected by our Constitution and is a vital instrument for raising issues and creating change. But when it turns violent, it undermines the very justice that it seeks to achieve."