One woman without water 16 days and counting 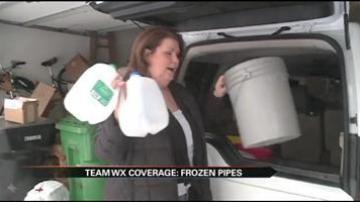 SOUTH BEND, Ind. -- One South Bend woman is looking for answers after frozen pipes have left her and two other neighbors without water for more than two weeks.

It has been 16 days since Dr. Janet Fisher-McPeak has seen running water come through her South Bend home.

She is keeping track with a sign placed in her front yard.

It has been more than two weeks since she’s had a working shower, toilet, and kitchen sink.

Now Fisher-McPeak is trying to get in touch with anyone who can help her.

She then tried plumbing companies, but they have told her they are backed up two to three weeks.

Fisher-McPeak went into survival mode. She's using jugs and pails to get water from a neighbor.

She says it doesn’t cover all of her needs.

"Then I’ve had to go to the laundromat to wash my clothes. And you need to wash the dishes so I’ve been eating from paper plates and plastic cups.”

But possibly the biggest inconvenience is showering.

In addition to the wait time, Fisher-McPeak says using a plumber to unfreeze her pipes could cost her a couple thousand dollars.

Despite her situation, she is trying to stay positive.

“I’ve learned some survival skills. I’ve learned how to force flush a toilet, a tankless toilet, I’m so proud of myself.”