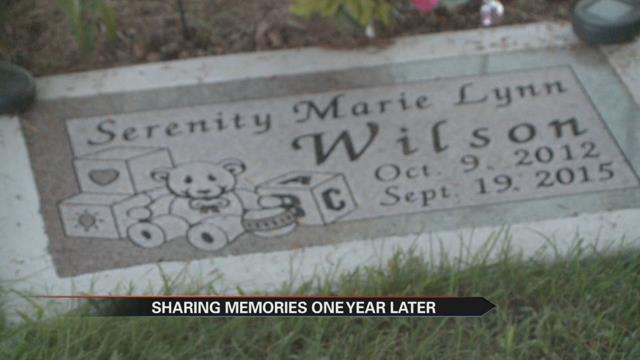 Monday marks the one year anniversary of Serenity Wilson’s death.

A vigil was held at Oak Hill Cemetery on Monday night.

Serenity was the little girl from Plymouth who tragically lost her life after police say she suffered multiple blunt force injuries to her head given to her by her mother’s boyfriend.

Serenity’s grandmother, Deborah Blacklaw, say there’s nothing on this Earth that can give her peace after her two year old granddaughter was taken far too soon as a result of a tragedy which rocked Plymouth.

On September 18, 2015, Krysti Lavanway found Serenity, her two- year-old daughter, unconscious and badly beaten, on the floor of room 252 at the Economy Inn.

Hours later, she took Serenity to the emergency room, where she would pass away one day later from multiple head injuries, just 10 days before her third birthday.

On the one year anniversary of Serenity’s tragic death, her grandmother, Deborah Blacklaw, says this past year has been a nightmare.

“I can’t be around any kids that are three and under that on the backside looks my Serenity because once when you ask them to turn around they have different eye color and it’s been trauma therapy, it’s been Christian therapy, it’s been just therapy after therapy trying to talk this all out but you can only talk about it for so long  and then you gotta find your kind of normal but I still believe she’s on earth with us she’s just visiting someone else and she eventually will come back to me,” said Blacklaw.