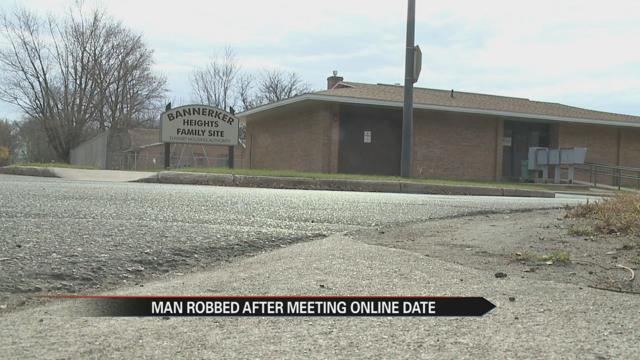 He was looking towards a date night and so was the woman he was meeting, but the two had different expectations. On Saturday around 5:15 p.m. police were called to Bannerker Heights Apartments for an armed robbery.

Police say lately they haven’t seen many online meet-ups turn into a crime investigation but what happened Saturday is a reminder that you can’t always trust a profile you see online.

“He had met somebody on a dating app or website of some sort,” says Sergeant Chris Snyder with the Elkhart Police Department.

Now-a-days meeting people on dating apps is fairly common, but on Saturday afternoon the  meet-up in Elkhart turned into a startling incident for families in Bannerker Heights.

“It really worries me and I have my son who is already skidish,” says Melanie Bickel.

This same scary incident was also an unpleasant surprise for the online dater.

An Elkhart man in his late 30s met a woman online. After getting her address he headed over to Malcolm Drive expecting to meet the woman inside one of the apartments.

“He was confronted by a black male with a knife,” says Sergeant Snyder.

The online dater says when he got inside the apartment that man with the weapon and a woman greeted him, stole his wallet, and let him go.

Fortunately the man was not hurt.  Now police want to remind people to be cautious when meeting up with strangers.

Police are investigating this case trying to find out if the thieves live at Bannerker Heights.