Organizers bring in dozens of off-duty officers for pub crawl 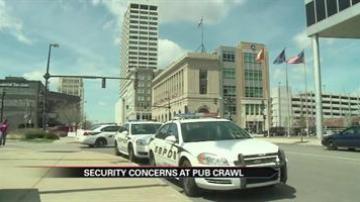 SOUTH BEND, Ind.-- There was an increase in police downtown over the weekend for various proms and a massive pub crawl.

The 'Bend it til it breaks' pub crawl started at 12 at the old College Football Hall of Fame on Saturday.

Event organizers hired dozens of off-duty officers and security guards to work at the event to ensure everyone's safety.

Lindsay Kring said, “For each group of 50 we have a steward that goes along with them, we have two police officers on each location and we also have them stationed all through the route for it.”

The event is aiming to break a Guinness World Record for the largest pub crawl while raising money for charity.

Mike McNeff said, "Bakers at the Double Tree is designated a non-alcohol stop so when you get there you are required to have a can of Redbull or a bottle of water.”

The event coordinator said that the venues also have their own additional security for the crawl.

McNeff said, “Each location has their own security measures in place, I know we’ve got 6 regular security officers at the Century Center as well as the Hall of Fame and those South Bend officers who will be going around the route with us.”

The final event ends at Four Winds Field for a concert at 8 p.m.