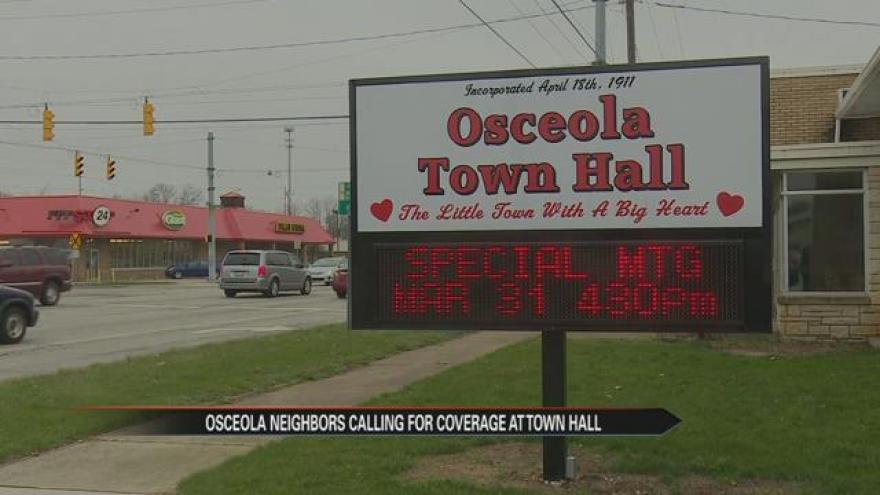 The Osceola Town Council listened to neighbors’ concerns at a special meeting Friday. They’ve promised to decide on a solution to the fire department problem on Tuesday.

“I want coverage some way or another—lives are at stake here,” said one neighbor, Jay Hertel.

“I’m a widow. I live alone. If I need an ambulance or fire help. If they’re coming from South Bend, it just leaves you wondering and perturbed really,” said another neighbor, Kaye Solliday.

“After next Friday, when Baugo stops, it could be one of those situations where South Bend helps or they don’t help, but they have no obligation to do so in any other incorporated area, so that’s a huge concern for all of ours. We need to get this fixed, right?” said Penn Township Board President, Kent Hizer.

‘Right,’ says Osceola Town Council President Debra Davis, who adds that she just found out about this decades-long problem when she took over a year ago.

“It’s nothing new. We just inherited it, but we’re the ones getting chastised for it. And we have to fix it,” said Davis.

“I feel comfortable saying, yeah, we can do it. It just will be tight,” said Davis.

Before finalizing an agreement, Penn Township just has two stipulations:

“We need to stop the clock right? We’ve got this anvil hanging over our head that we don’t really know what’s going to happen after that,” said Hizer.

“Because of your choices, you as a governing body representing us have left us completely vulnerable to death and loss of personal property,” said Osceola resident, Susan Sebesta.

But council president Davis assures everyone that they do have a big heart for the small town.

“I just would like people to know that we do care about this town. We do care about the people. I know they don’t think we do. Tuesday night there will be a plan…We don’t want to let the town down,” said Davis.