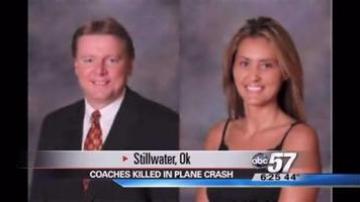 STILLWATER, Okla. Oklahoma State University is reeling from the death of two coaches.

The university's women's basketball coach and his assistant were killed Thursday night when there single engine plane crashed in Arkansas. Kurt Budke and Miranda Serna were on a recruiting trip.

The pilot, 82-year-old former Oklahoma State Senator Olin Branstetter, and his wife, Paula, also died in the crash. There were no survivors.

“We have to pull together as a family. We’ve got to try to do that,’ said OSU President Burns Hargis.  “I think this is the longest I've gone without tearing up.”

The university also had 10 people with the men's basketball program die in a plane crash back in 2001.