Out of the shadows: Michelle's story 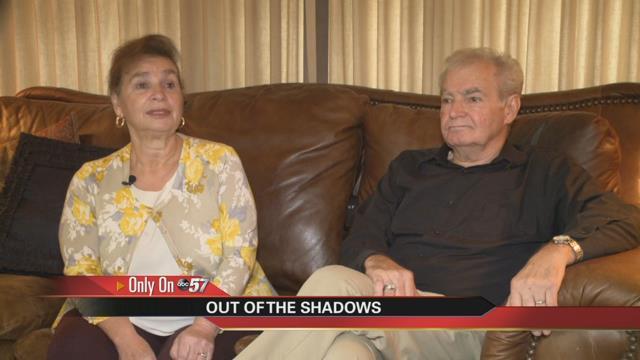 The Granger home was destroyed.

One month later, Michelle Ellenberger, a resident of the home and wife and mother of two, was charged with the explosion.

She was given three years probation.

Nine months after that, Michelle’s father found his daughter hanging in the garage.

She had committed suicide after years of fighting mental illness.

But that isn’t the end of Michelle’s story.

Her parents, Kay and Larry Green, talked with ABC 57 about the pain hidden behind Michelle’s well-polished smile, and how others can keep Michelle’s fate from being their own.

“This is something that should be recognized and cared for,” Larry said.

When it came to recognizing Michelle’s problems, nothing in her childhood gave warning of the struggles to come.

By all accounts, she was a happy kid.

The second of five children, she grew up comfortably in Mishawaka.

Popular and pretty, Michelle went on to marry and have two children of her own, not including the neighborhood kids who also called her ‘mom’.

“Her house was the open house. You can ask any of her neighbors. They always knew where their kids were,” Kay said.

Despite all this, Michelle’s life began to take a dark turn in her early forties.

It started with small fears.

The Greens say Michelle worried she was getting strange messages on her phone, or incorrect numbers on her bank account.

That fear quickly grew out of control.

“She got to where she thought there was another Shelly out there, someone imitating her and doing things to try to get her in trouble,” Kay said.

Her family says she lived in utter fear for years.

“We called them ‘spider webs,’ because she’d get an idea in her head and it would attach to the next idea and the next idea, until it was just this huge conspiracy against her,” Kay said.

Her parents immediately sought help for Michelle, but were faced with obstacles.

They say there were few beds available in treatment centers.

“You cannot be admitted to any of these places. They don’t have the beds. You can only be admitted if you area a danger to yourself or others,” Kay said.

Doctors themselves see this problem.

“We keep as many beds open as we can,” Dr. Suhayl Nasr, Medical Director of Psychiatry at Beacon said.

Nasr works at Epworth, the largest inpatient mental health facility in the region, and one of the only options for inpatient care for multiple counties.

For people in crisis, the demand for beds often outweighs the supply.

“It’s such a painful experience at times when we have fewer beds available for people who need it,” Nasr said.

Other times it was Michelle herself making it difficult to get treatment, hiding her illness from doctors.

“She was a brilliant girl,” Larry said.

Not only could Michelle convince her doctors she was alright, she convinced almost everyone else, from coworkers to friends.

“Besides fighting the disease she had to wear a mask,” Kay said.

For nearly nine years Michelle wore that mask, working at Granger Community Church and keeping up appearances at sporting events and neighborhood gatherings.

However, the mask was about to come off for good.

“The last crisis that Shelly had was her home,” Kay said.

Michelle attempted to kill herself in 2015, turning on all the gas in her Granger home.

Her parents say she thought she was alone at the time.

“Her daughter came home early, and came in the back door and smelled the gas, turned the stove off, and it caused an explosion, the spark from the stove,” Kay said.

Michelle, her daughter, her daughter’s boyfriend, and a police officer were sent to the hospital with minor injuries.

“When a person is mentally ill, that line is not there,” Kay said.

The Greens say Michelle believed the house would catch fire and her suicide would appear to be an accidental death.

Her parents say she even took her children’s belongings and locked them in a shed before turning the gas on.

One month after the explosion, in July 2015, Michelle’s paranoia came true.

She was arrested, charged for blowing up her house and harming others.

Michelle entered a guilty plea, and was sentenced to three years probation, along with a promise she’d continue therapy and recommended treatment for her paranoid schizophrenia.

“Sometimes we have to force them to do that and in her case she was ordered to go through therapy and go through the treatment she needed,” Prosecutor Ken Cotter said.

She was living with her parents, even thinking of buying  a place of her own again.

However, in April, Michelle made a final and fatal decision.

Larry found his own daughter hanging from a garage in his backyard.

“It’s a sight no parent should ever see,” Larry said.

Her funeral was held at Granger Community Church.

“People came from the time the doors opened, were still coming when the funeral was going on,” Kay said.

The Greens say many of the visitors were strangers who revealed they too were battling mental illness,

“They wanted to know where they could get help,” Kay said.

That’s when the Greens decided to take action.

“Anyone who has a daughter, a wife a mother that has any type of mental illness, for crying out loud, don’t cover it over. Don’t hide it. Recognize it. Don’t be ashamed of it. It’s like any other disease,” Larry said.

That’s the message they hope to spread in April 2017, a year after Michelle’s passing, with their walk for awareness through Beutter and Battell parks in Mishawaka.

“We want to have a walk called ‘Out of the Shadows.’ We are hoping that people who are dealing with anything from depression to paranoid schizophrenia will be brave enough, that they will drop that mask and participate in this walk,” Kay said.

The Greens say the goal of this walk is two-fold.

First, they want to reduce the stigma, second, demand more and better care.

During the walk, each step the Greens take will be for Michelle, proud and unashamed.

“I want people to know what a fighter she was. She did everything she could,” Kay said.

A new structure is slowly taking shape in its place for someone else, and the memory of Michelle remains.

“To me that’s a real honor, to have her for a daughter. Other than that, we miss her. And we always will,” Larry said.