Outrageous EpiPen prices lead some people to make their own 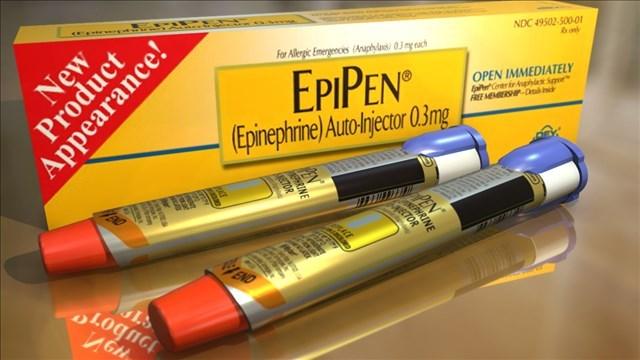 SAN FRANCISCO (CNNMoney) -- A man sits in a dimly lit room and fills a syringe with clear liquid. After a few minutes of combining medical equipment like a puzzle, the YouTube video cuts to footage of him injecting himself.

The man is Michael Laufer, a PhD mathematician and one of the creators of the EpiPencil, a device from the hacker group Four Thieves Vinegar Collective.

As described in a demo video, the organization aims to democratize pharmaceutical manufacturing and allow people to inexpensively make their own drugs or medical devices.

"We're giving people the requisite information to empower themselves to manage their own health," Laufer told CNNMoney.

The EpiPencil, which costs less than $35, requires just a few parts which someone can easily get themselves, including an auto injector and a syringe.

The epinephrine medicine and delivery system (an epinephrine pump) are currently at the center of a debate about pharmaceutical pricing. Mylan, which virtually owns the market with its FDA-approved EpiPen, is facing scrutiny from the U.S. government for charging upwards of $600 for a two-pack set of EpiPens. It cost just $94 in 2007. It's the device, not epinephrine itself, that's so expensive.

About 15 million people have food allergies in the U.S., and allergic reactions account for about 200,000 emergency room visits per year, according to Food Allergy Research & Education. When someone has an allergic reaction, he or she must inject themselves with epinephrine to prevent anaphylactic shock.

That's why Four Thieves Vinegar Collective made an alternative. According to Laufer, it took only two weeks of research and prototyping to provide a cheaper, do-it-yourself solution for patients with severe allergies who can't afford the Big Pharma price tag.

The components can be purchased over the counter -- aside from the epinephrine, which doctors prescribe. The EpiPencil is bulky and not easy to carry, but the demo video shows it adequately injects liquid.

However, making your own medical device is risky. The needle and other equipment need to be sterilized and can't touch anything that might contaminate it.

The EpiPencil is more of a side project for Four Thieves Vinegar Collective. In July, soon after the price gouging scandal involving Martin Shkreli, the company unveiled the Apothecary MicroLab, a DIY pharmaceutical project to let anyone make their own drugs. The group is expected to roll out a beta version of that product soon, although it's unclear what the legal ramifications are.

The FDA can't do anything about DIY devices like the EpiPencil as long as you have a prescription for epinephrine, since the components are legal.

Theresa Eisenman, an FDA spokeswoman, told CNNMoney products like this could be unsafe.

"Using unapproved prescription drugs for personal use is a potentially dangerous practice," Eisenman said. "Neither FDA nor the American public have any assurance that unapproved products are effective, safe or produced under Current Good Manufacturing Practices.? Unapproved drugs may be contaminated, sub-potent, super-potent or counterfeit."

Dr. Douglas McMahon -- a Minnesota-based allergy and asthma specialist -- is skeptical of DIY products like the EpiPencil, noting he wouldn't suggest a hardware hack to patients looking to save money. Although it's frowned upon by the FDA, McMahon said some doctors give their patients a syringe of epinephrine with the warning that the shelf life is only three months.

McMahon is working on his own EpiPen alternative called AllergyStop, an epinephrine delivery device that can fit on a keychain and lasts slightly longer than Mylan's EpiPen -- about 15 months. Mylan's expires after a year. AllergyStop will cost an estimated $50 for one dose of medicine and the pump, and will require a prescription.

McMahon has spent the last seven years working on epinephrine devices, a cause driven by his own severe allergies. He carries AllergyStop in case of an emergency. His four-person team is trying to crowdfund the product on Indiegogo, but donations have been slow. Now, he's looking to raise funding from investors who share his ethos of wanting to provide affordable medicine.

Other startups have tried to provide cheaper options. Massachusetts-based Windgap Medical is also working on making an affordable alternative. Meanwhile, Intelliject -- now Kaléo Pharma -- launched the highly-publicized Auvi-Q in 2013, but it was later recalled.

"Competition drives price down, and if there's more competition the medicines won't be as expensive," McMahon said.