Owner of Inwood Ranch speaks out 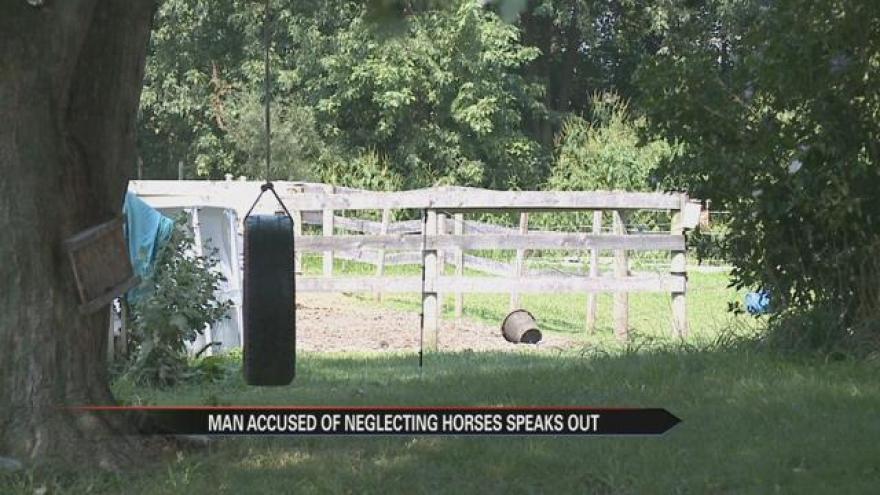 Frail and fragile horses along with other animals were found wandering alone on a training farm near Plymouth. The man who owns the ranch, Brian Watts, is talking out about the conditions of some of those animals.

Watts says he received horses that were thin and he was nursing them back to health.

His home on 11A Road in Inwood stands quiet as he and his family have left the state.

“I had two job interviews I left a family member at my house with 65 barrels of hay and 14 bags of grain and I also had it lined up for hay to be dropped off,” says Watts.

Watts is currently in Mineola Texas working on a horse ranch.

He says he has trained horses his entire life and would never allow animals to reach the edge of starvation.

ABC57 reporter Andreina Centlivre spoke with Watts on the phone.

Centlivre: The way some of them were found they were super skinny is that how you had left them?
Watts: That’s how I received them.
Centlivre: When did you receive a lot of those horses?
Watts: I would say about a month ago.
Centlivre: So why were a lot of them so thin then even after a month?
Watts: Because they got sick. People we got them from weren’t taking care of them they weren’t worming them properly they didn’t have their vitamins.

When Watts and his family left for Texas about a week and half ago he says he left a family member in charge.

“They were not fed Saturday, Sunday, Monday, Tuesday, and Wednesday. They went six days without food and water and within six days a horse can drop hundreds of pounds,” says Watts.

“So are you saying a lot of what we seen yesterday happened in a matter of six days?”

“It could of. Yes,” responds Watts.

Watts says he has always worked to provide for his animals.

“I’ve always had food for them and cared for them,” explains Watts.

As of Tuesday the Marshall County Prosecutor’s office says charges have not been filed against Watts.