Owner of Pump House Grille speaks out on closing 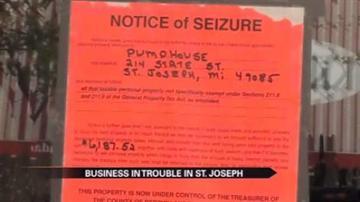 SAINT JOSEPH, Mich.-- Saint Joe is where Tom Jennings says his heart lies. But after a disappointing fallout at Pump House Grille- his heart is broken.

"The closing of it is the saddest day in my life," said Jennings, owner of Pump House Grille. "Other than my father passing."

He says a strained business partnership with Southwest Michigan businessman is the real reason no one's dining inside his restaurant.

"Me and another partner have made an offer to John to buy the building and he didn't accept it."

The inability to reach a compromise led to unpaid bills, but not because the money wasn't there.

"That is totally not the case," said Jennings. "I could write a check for that tomorrow."

But for now, his business partner owns the property. It's a messy situation that's left Jennings trying to comfort long-time employees.

"I saw them this morning and just broke up. I've had a long day," said Jenning.

As he sits in his empty restaurant, he says he's missing his customers most of all.

"My favorite thing about the restaurant is meeting the people that come in."

A lot's changed since he took that leap of faith to buy the building.

"When we opened this restaurant- at that time back in 2000 there were either nine or eleven empty storefronts here on this little three block area."

He says even if he never sees another customer again, he hopes he added something to his hometown.