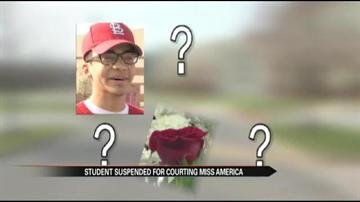 YORK, Pa. — What started off as a stunt ended getting a Pennsylvania high school student in trouble with school officials.

That's when high school senior Patrick Farves thought it would be a great idea to ask Davuluri to his high school prom.

That is until school officials got wind of the stunt. They pulled Farves aside shortly before the presentation and told him not to go through it.

"But at that point in time I was already like, I was just set on doing it. I was looking at it like it was now or never type thing," said Farves.

During the question and answer session, Farves popped up on stage with a flower and asked Davuluri to the prom.

Afterwards, Farves was asked to leave the auditorium where school officials told him he was getting a three day in-school suspension.

Barring any major developments, Farves is still going to the prom, but without Miss America as his date.