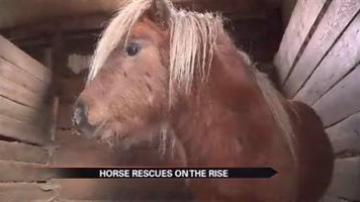 ST JOSEPH COUNTY, Ind. -- A horse and pony were found wandering on Fir Road in St. Joseph County after they were likely abandoned by their owner. A family that rescues horses said this has happened about a dozen times since 2008.

For the past 65 years, Ken Ecker has been training and caring for horses.

During that time, he's seen his fair share of abandoned horses.

"I been at it for so long, that hardly anything surprises me anymore,” said Ecker, owner of Clayview Farms.

The most recent incident was no exception.

Animal Control officers discovered a horse and a pony on Fir Road.

It’s something that has become more common in the past few years.

"It's really bad, and I don't know, it might get worse,” said Ecker.

He has taken in more than fifteen abandoned horses since the start of the recession.

The cost of tending to horses has gone up dramatically, but he said that's not an excuse for people to get careless.

One horse found had lacerations on its nose from a rope being tied too tightly.

"They want something, but they don't want to be responsible for taking care of it,” said Ecker.

Pushing that burden on him. He wasn't planning on the extra costs, but it's a sacrifice he is willing to make.

"We'd rather do that than let them starve to death. We take care of them, and find them homes, and places they can go to,” said Ecker.