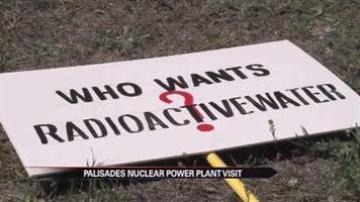 COVER TOWNSHIP, Mich. — Plagued with leaks, the Palisades Nuclear Power Plant will not go back online until Congressman Fred Upton says it is safe.

He toured the plant on Monday and said this is not about politics, it is about keeping toxic chemicals out of the community.

Protestors lined the street near the plant before Upton arrived for his visit. They wanted him to know they want the plant shut down.

And while that did not happen, they did get the next best thing.

Palisades will remain off line until further notice.

Many in the community say the plant is dangerous and has been nothing but trouble.

Last week, diluted radioactive water started gushing out of one of the tanks. About 80 gallons leaked out in just 24 hours.

But plant officials say there were never any health risks.

"All the material was captured on site," said Palisades Chief Operating Officer Tim Mitchell. "There was no detectable radioactivity going to the lake."

But Upton is not sold on the safety at Palisades.

After a tour of the plant and the cause of that leak, a small crack, Upton wants to shut it down until all safety issues are addressed.

They are bringing in experts to man the grounds and adding an extra 1000 hours of inspection to the Palisades plant.

"The NRC will not allow this plant to operate if we are not convinced, not just Entergy," said NRC commissioner Kristine Svinicki. "Entergy needs to be convinced that this plant is safe, but we will independently need to be convinced of that as well."

And Upton will need convincing as well.

"This is to be a safely run plant if it is to operate at all," said Upton.

Congressman Upton did not say the plant will be shutting down. But he did say that all options are on the table.

Palisades says they may look at replacing the tank that is cracked.

The tests are expected to take a few more days to complete, and they will make decisions on how to move forward at that point.