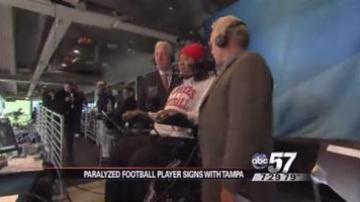 Eric LeGrand may be paralyzed but as of Wednesday morning, he was a professional football player.

The Tampa Bay Buccaneers have signed the former Rutgers defensive tackle to a contract.

LeGrand hurt his spinal cord while playing against Army over a year ago.

If LeGrand's career hadn't ended prematurely, he may have been picked in last week's draft.

No word on what his role will be in the franchise.