Paraplegic mountaineer an inspiration to all 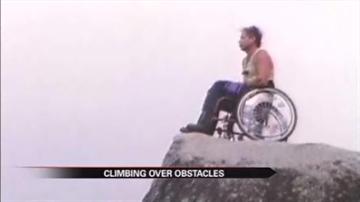 The first paraplegic to ascend to the top of El Capitan and the Half Dome in Yosemite National Park shared his story to a room full of occupational and physical therapists at Memorial Hospital Thursday.

"Well I don't really like the word accept, but at some point you have to say life goes on,” said Mark Wellman.

Or life goes up, at least for mountaineer Mark Wellman.

His ascent to the top of El Capitan secured him a place in history.

"I had a physical therapist at my rehab hospital tell me: 'Mark, you have to train like you're training for the Olympics' and I really took that to heart,” said Wellman.

His arms became his legs – and after 6 long days, he reached his goal.

Now he helps others.

"What's for me is to help other people climb their mountains and figuring out the adaptive equipment to get them on that artificial wall,” said Wellman.

As a motivational speaker he tours the country, produces adventure films and is sponsored by North Face, Cliff Bars and General Motors- to name a few.

He eventually made it to the Olympics. He lit the cauldron with a flaming torch in 1996.

He never let his injury dim his inner fire.

"They need to know that there is hope for the future and there is many wonderful opportunities if they choose to take them,” said Occupational Therapist Kelly Grall of Memorial Hospital.

Even if it's not climbing mountains, everyone can be a hero.

Wellman was involved in a freak climbing accident.

He slipped on some gravel when descending and fell 100 feet off the mountain.

He waited more than 30 hours for a helicopter.

He says he was an athlete before- and will remain one-- with or without the use of his legs.