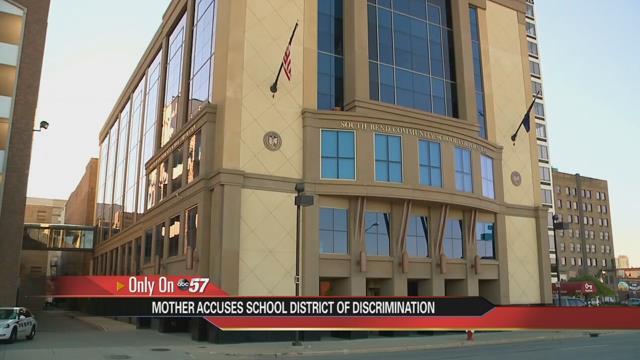 One South Bend Community Schools parent is speaking out against the mistreatment of her son.

She says is a pattern of behavior by some teachers that’s breeding a culture of racial discrimination in the corporation.

“Just that humiliation and him getting into my car, to me that’s some form of just unfair treatment, he’s only eight,” said parent Monique Love.

Love says was hesitant to go public with her son’s story because she’s also a teacher in the district and she’s the daughter of school board member dawn Jones.

She says she didn’t want to her situation to impact others but after what she’s calling inaction from this district, she says enough is enough.

“I’m bringing awareness to an issue but I’m being handled with hostility like I’m doing something wrong,” she said.

Love says her eight-year-old son had to endure unnecessary stress during his final weeks of school.

“In the weeks of April 11, April 18, and April 25, my son continuously felt uncomfortable and was the victim of numerous derogatory remarks and actions by his teacher,” said Love.

Love read a prepared statement to me and the members of NAACP Tuesday.

One similar to sentiments she shared during last week’s school board meeting.

“The allegations towards my son and in fact never occurred on his behalf,” she told the board last week.

What she referenced both nights was an incident involving her son’s teacher at Wilson Primary Center.

Love says her son was the target of verbal abuse several times leading up to an accusation that her son had pushed the teacher in the hallway.

‘The next day I had a chance to view a video of the incident,” she said. “The footage revealed that my son did not run, he did not push his teacher, in fact his hands were clasped in front of him as he waited his turn in line.”

After a meeting with the school’s administration, members of the school board and superintendent. Love says nothing has been done.

So she’s turning to the NAACP to bring to light more issues like this in the district.

“Please know that is our goal to bring these injustices to light in order to address the inequities in our corporation and work together to strengthen our public school system,” said NAACP member Regina Williams-Preston.

Love is calling for a public apology and district-wide cultural competency training among other things.

A representative for the school district sent in a statement regarding Love's complaints.

SBCSC is committed to providing an educational environment free from all forms of unlawful discrimination, harassment and retaliation, and takes these matters very seriously.  Whenever the SBCSC receives a complaint alleging that conduct is racially motivated, the School Corporation follows its protocols to aggressively and thoroughly investigate.  In this particular instance, the SBCSC received a complaint alleging that a teacher engaged in conduct that was racially motivated.  In accordance with its protocols, the SBCSC interviewed the complaining parent, the student, the teacher, and all witnesses.  This aggressive and thorough investigation was reported to the Superintendent who concluded that the evidence overwhelmingly established that none of the actions taken were racially motivated.  As in all student and personnel matters, we cannot comment on any further specific details.  However, we can say that even though the allegations did not amount to a violation of SBCSC’s nondiscrimination, anti-harassment, or non-retaliation policies, we have met with the parent on multiple occasions and are offering various supportive services to the family and to the student.  The parent has, thus far, chosen to reject these services. The School Corporation's offer of services remains open for this student, and all families and employees can be assured that any forms of unlawful discrimination, harassment and retaliation will not be tolerated in South Bend schools.

Monique Love says she had received an email from the school's administration Tuesday afternoon ahead of her meeting with ABC 57, offering a social worker for her son.