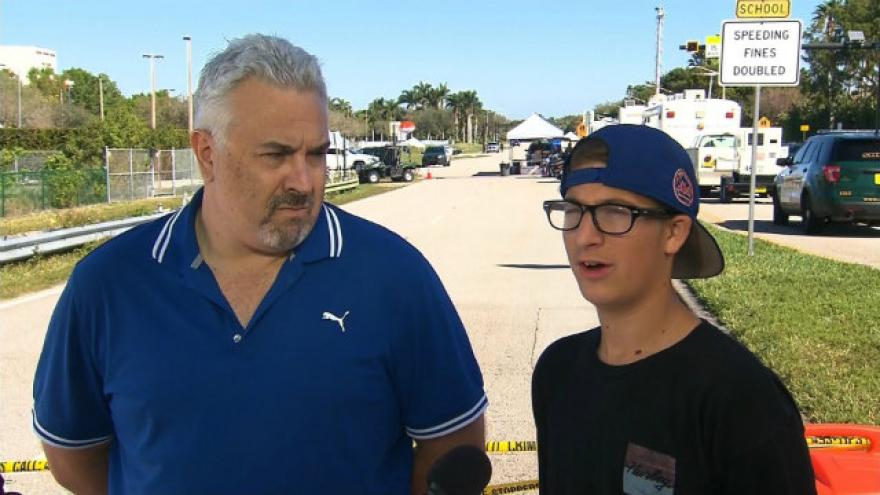 (CNN) -- Father and son stories aren't supposed to look like this.

"I was praying for my friends and family to be OK," said Braden Freidkes, a freshman at Marjory Stoneman Douglas High School. He was inside the school when a gunman started shooting.

Braden eventually made it out and into his parents' arms. They had been trying to reach him repeatedly and up until that point had feared the worst. "We were one of the lucky ones. We were able to get him and he was safe," said John Freidkes, Braden's father.

But now Braden and his dad have a shared experience, in a way they could have never imagined.

John Freidkes was in Las Vegas in October when a gunman opened fire onto a concert crowd.

"There was a crowd of people running towards us yelling 'there's a shooter, there's a shooter,'" said Freidkes. "We were lucky enough to jump in a taxi cab where there were two women in there already. One was hyperventilating, the other was seemingly in shock. We asked if they were coming from the venue and they were."

'I don't know what to tell my kids'

Just months later, Freidkes is at a loss for words.

"My parents never had to talk to me about situations like this," Freidkes said. "You get up every morning and you're afraid to turn on the news."

Freidkes said at first he was worried about sending Braden back to school, and he thought about homeschooling, but he quickly dismissed it. "You can't live in fear," he said.

"It's got to stop. There's got to be a way," Freidkes said. "Our political leaders that we vote for work for us, not for lobbyists, and they need to remember that."

'I want to get an education, I want to be safe'

Braden was in teacher Scott Beigel's class as the shooting unfolded.

"I asked my teacher Mr. Beigel, saying 'What's going on,' because we all ran back," Braden said.

Beigel was one of 17 people killed in the Parkland shooting. He was Braden's favorite teacher and died defending his classroom.

"What really hurt me is that I passed every test, but the last one I did bad on and that's how it ended for me. I was super sad to kind of let him down on that."

Braden said he had to walk around his teacher's body when he was eventually able to leave the school.

While some have viewed mass shootings as a continuous cycle of "thoughts and prayers" followed by inaction, some of these student survivors have rallied around #NeverAgain in hopes of making the hashtag a reality.

It's a reality built on stakes that both a father and son have now seen firsthand, only months apart.

Marches are being organized around the country with one mission: To pressure members of Congress to act on gun reform and to make schools safer. They include a march on Washington called "March for Our Lives" on March 24.

CNN will hold a town hall with students and parents affected by the Parkland shooting. Both Florida senators, Bill Nelson and Marco Rubio will participate. President Trump and Gov. Rick Scott were invited, but neither will be attending.