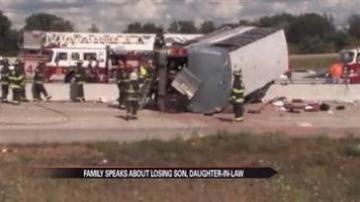 INDIANAPOLIS — The family who lost their son and daughter-in-law in an Indianapolis bus crash has broken their silence.

The pastor talked about the three members who were killed during that crash.

The bus was returning from a summer camp in Michigan when it overturned coming off of I-465 on Saturday.

"Saturday, the 27th of July forever changed our lives. Chad and Courtney, the unborn granddaughter was taken with them to heaven," said Pastor Charles Phelps. "They left us and there are no words that can express our grief. I'm so very thankful for the peace of God that passes on understanding. We found comfort in the promises we discovered in the Bible."

A mother of five who was a chaperone on that trip also died.

The driver told witnesses that brakes on the bus failed as he was trying to make a left turn.