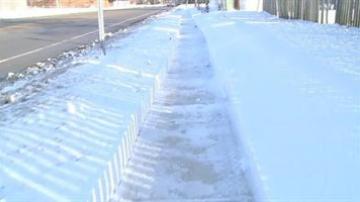 GOSHEN, Ind. -- Students in Goshen walked home from school safely on sidewalks that were clear of snow thanks to one of ABC57's viewers. Now parents want to know what will happen after the next big snowfall.

On Tuesday, we showed you video of students walking in the street because there was too much snow on the sidewalk.

Wednesday morning, someone pulled out their snow blower and made a path in the snow on West Clinton Street all the way to the elementary school.

"I woke up this morning and I had seen the news last night and I was just thinking about the issue, about the problem. Is it the homeowners responsibility? Is it the city's responsibility? And you can make cases either way," said David Van Der Wiele, Pastor of Green Road Church.

Van Der Wiele took matters into his own hands and cleared the sidewalk.

"I thought, what would Jesus do in this situation? He'd grab a shovel and do it himself and I happen to have a snow blower so I decided just to do it," said Van Der Wiele.

Parents and grandparents are thankful.

"I really, really appreciate that man because if it wasn't for him, they would have been walking through that again today. And I know my youngest one fell twice out here in this street," said grandparent Mary Coles.

The issue is resolved for now, but who will clear the sidewalks next time?

Coles says she's not willing to sit and wait for someone's child to get hit before a more definite plan is put in place.

She called all city council members hoping someone would help.

She understands the city is strapped for cash, but she says the kids are suffering the most.

We spoke with Councilman Stutsman who says the council will discuss how to make sure sidewalks near schools are always clear.

Councilman Stutsman says it could come down to creating a new law.