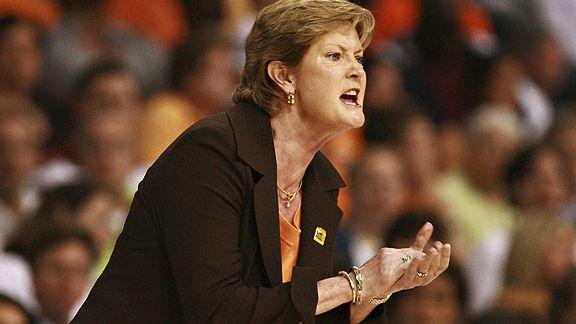 Pat Summitt, the legendary University of Tennessee women's basketball coach, has died, the Pat Summitt Foundation announced Tuesday morning on its Twitter account. She was 64.

It is with deep sadness that The Pat Summitt Foundation announces the passing of our beloved Pat Summitt. https://t.co/iE1ZCf1UPa

Summitt stepped down as Tennessee's coach in 2012, one year after announcing her diagnosis of early onset dementia, Alzheimer's type. Even after stepping down, Summitt remained involved with the Lady Vols, holding the position of head coach emeritus.

Summitt coached the Lady Vols to eight national championships in her 38 seasons and notched 1,098 career victories, more than any other Division I basketball coach. She was named NCAA coach of the year seven times. She also played for the U.S. Olympic team in 1976, the first year there was an Olympic women's basketball tournament, and took home a silver medal.

Summitt was widely know for her stare -- an icy look she would flash to players after a bad play.

In 2012, Summit was the recipient of the Presidential Medal of Freedom and the Arthur Ashe Courage Award at the ESPY Awards.

Summit was born in Clarksville, Tennessee, on June 14, 1952. She grew up on a dairy farm in Henrietta, Tenn., where she planted tobacco and milked cows.

"I look back now and I think that just made me who I am, in terms of my drive and my work ethic," she said in an interview with ABC News' Peter Jennings in 2005.

She and her three older brothers learned to play basketball using a hoop her father put up in the hay barn.

"When you grow up on a dairy farm, cows don't take a day off. So you work every day and my dad always said, 'No one can outwork you,'" Summitt told ABC News' Robin Roberts in a 2011 interview.

When she was named head coach of the University of Tennessee women's team in 1974, Summitt was just 22, barely older than her players. The university had originally offered Summitt an assistant coaching job but promptly promoted her when the team's head coach announced she was taking a sabbatical.

In those early days under Title IX -- the landmark federal law that led schools and colleges to dramatically increase access to sports and other programs for women -- women's basketball games weren't televised and attendance was poor. The Lady Vols were so strapped for cash that Summitt washed her players' uniforms at home and drove the team to games.

"I remember nights I was driving the van and I'm about to go to sleep, and I'd just roll down the window and stick my head out," Summitt told Roberts.