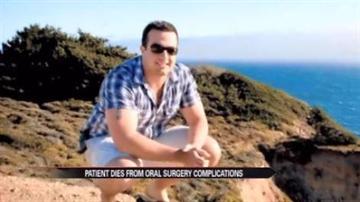 TEMECULA, Calif. — The family of a man who died after having oral surgery is demanding answers.

Mark Lapinski, 24, underwent a surgery to have his wisdom teeth removed.

It is reported that during the surgery he woke up and began coughing. The operating staff then gave him propofol.

The paramedics said he had surgical gauze stuck in his airway.

"It is all too much to get your mind around that a 24-year-old goes in for dental procedures and leaves on a stretcher and never revives. It’s just unfathomable epically this young man who was just a wonderful, wonderful kid," said a family friend.

The doctor's attorney released a statement saying immediate measures were taken once the patient started to wake up.

An autopsy is still pending.