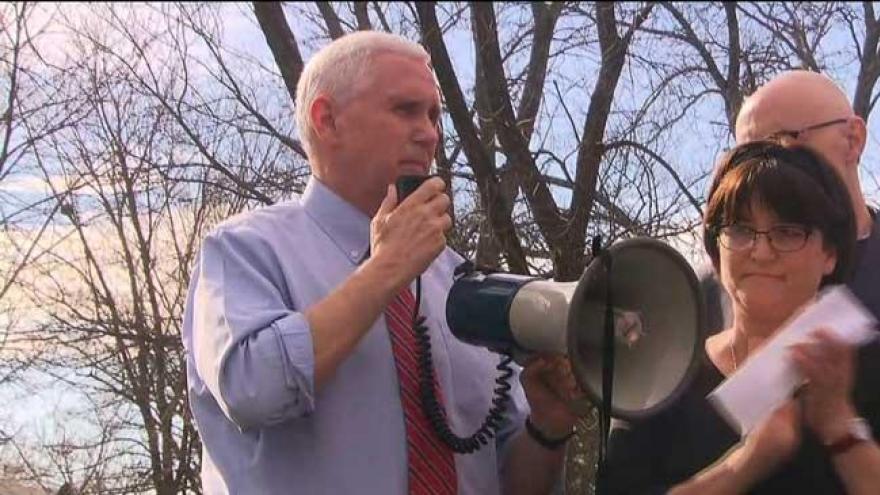 Alongside Missouri Gov. Eric Greitens, Pence stopped by Chesed Shel Emeth cemetery in University City -- where a vandal or vandals toppled and damaged more than 100 headstones in the past week.

Pence's boss, President Donald Trump, was criticized for not speaking out sooner against anti-Semitism, but on Tuesday the President called bomb threats at 48 Jewish Community Centers in the US last month and other recent anti-Semitic incidents "horrible" and "painful."

Pence, for his part, offered an unprompted message after receiving a tour of the Fabick Cat factory, which builds heavy machinery and work tools.

"We condemn this vile act of vandalism and those who perpetrate it in the strongest possible terms," he said to applause, before recalling his recent visit to a concentration camp in Dachau, Germany. "We saw firsthand what happens when hatred runs rampant in a society."

Pence told the story of the Americans who liberated the camp and how welcome they were in the eyes of the Jews who were imprisoned there.

Later, brandishing a bullhorn at the cemetery, Pence thanked the governor and the workers who have already begun to repair the headstones.

"There is no place in America for hatred or acts of prejudice or violence or anti-Semitism," he said. "You just make us all proud."