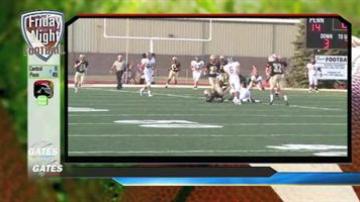 From the first sound of the whistle Penn was on the attack.

First, Zach Oakley tosses a perfect pass to junior Nathan Miller to make it 7 to 0.

Central goes to punt and it's blocked by Mark Winovich. Kyle Treber scoops it up for the score.

Elkhart Central's Vinny Schnell kept trying to get an attack going, but the momentum was in the Kingsmen's favor.

Elkhart Central had only given up four points going into this game. We talked with Penn's head coach Cory Yeoman about the big win.

Cory Yeoman said, "First of all the two punt returns for a touchdown and a punt block on special teams really springboarded us and got us going and also on the offensive side of the ball we had some great runs and some great blocking at the point of attack and also down field.”