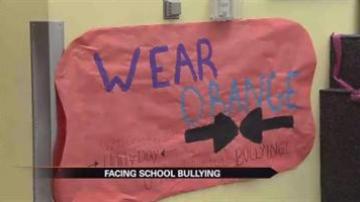 On Wednesday, the students and staff wore orange to symbolize unity and banners hung throughout the school. But, the movement all began with a small group of PHS students.

It was one year ago that Keri Richmond, a current Penn senior and her friends noticed a troubling trend in the Penn High School community.

“Penn High School had kind of a little bit of a problem with anonymous Twitter accounts that were cyber bullying others,” said Richmond. “There were about 15 of them throughout the school year on and off.”

According the Saint Joseph County Suicide Prevention Center’s research 85 percent of  middle school and high school students in 2010 reported being cyberbullied at least once. That number is up from 32 percent in 2007.

“It makes me think, ‘who do you think you are? What gives you a right to do this when you’re just hiding behind your computer being a bully,” said Richmond. “I think that people do that all the time, even here at school. It’s just like who do you think you are, you don’t have the right do that to another person.”

So, Richmond and her friends decided to take action. They began a movement called Project #Love to push for stronger bullying legislation in the state of Indiana.

“So schools have the power to get involved and stop things like twitter accounts or other different cyber bullying,” said Richmond.

“So, we’re trying to create a positive environment where the kids feel they have someone to come and talk to,” said Sarah Hendricks, a Penn guidance counselor