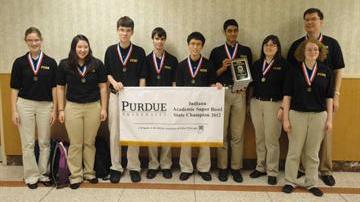 WEST LAFAYETTE, Ind. -- In one of the closest finishes in state finals history, the Penn High School Academic Super Bowl-Social Studies team won its third straight state crown on Saturday, May 5, edging out Orleans and Jac-Cen-Del for the overall crown at Purdue University's Loeb Auditorium in West Lafayette.

For Penn, in addition to being their third straight state title, it was also the 9th crown in the past 14 years and the 11th title since 1996.

Prior to the state finals, the Kingsmen had won the prestigious Warsaw and Ft. Wayne Bishop Dwenger invitationals along with the Mishawaka Regional.

On the season, PHS's Social Studies squad went 50-0 against all opposition and has now racked up 158 straight victories dating back to the start of the 2010 season.

Family participation on the Penn Social Studies team continued for the 2012 season as for the 11th straight season there was a Weldy on the roster. First

was Jennifer Weldy, followed by Michelle Weldy and now Phillip Weldy. Together, the three Weldy's have been part of six state titles.

(Source: This was a press release, provided by Joseph DeKever.)