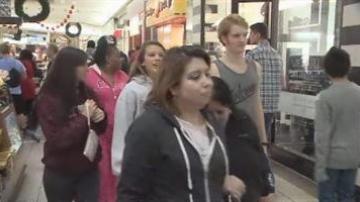 Overnight, folks braved the cold weather to be the first in line on this Black Friday. Many stores offered some of its biggest sales of the year.

At the University Park Mall in Mishawaka, there's really one word that sums the day up -- "busy." And that is how it has been all night.

Lots of eager people looking to save some money, and lots of eager store managers willing to take it all in.

For many managers it was music to their ears.

"Your total investment today in your health and happiness is only $95.51."

Full parking lots, long lines, and busy aisles, didn't stop hundreds of people from showing up and getting exactly what they needed while it was on sale.

"It's black Friday! Everyone is shopping. You know, this is where the deals were at" said Dontrell Newman.

And deals they found. Many stores offered as much as 50% off their items to shoppers who came around midnight. Others offered separate specials that go all day.

"Coming in was crazy. The doors were jammed packed, It was crazy everyone rushing in" said Newman.

"It's so packed in here. As soon as we walked in, there was people screaming trying to get in the doors and stuff like that" said Jordyn Matson.

Many people we talked to said they had no clue how much money they spent or would be spending, but they did say a majority of their holiday shopping is getting done today.

They say aside from staying up all night to shop, it's well worth it to get a few extra gifts for others and few things for themselves.

"Not too much hopefully, but deals are deals" said Hunter Kruszewski.
Dontrell Newman: "Usually its expensive but since it's Black Friday, I might as well get as much as I can." said Newman.