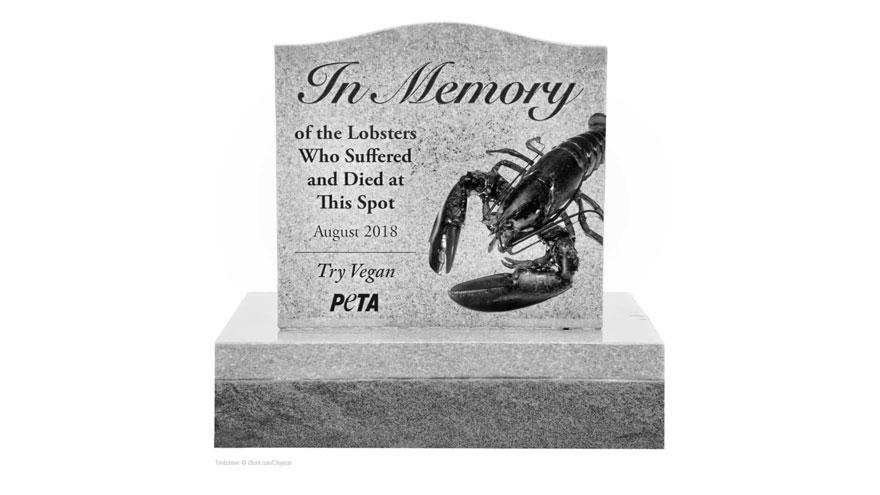 (CNN) -- PETA wants to make sure a bunch of lobsters killed in a vehicle wreck last week in Maine aren't forgotten.

The animal rights group, formally known as People for the Ethical Treatment of Animals, sent a letter to the Maine Department of Transportation asking for permission to install a 5-foot tombstone for the deceased crustaceans along a highway in Brunswick.

That's where a local seafood distributor's truck -- loaded with about 70 crates of lobsters -- overturned, CNN affiliate WGME reports, spilling thousands of them onto the roadway.

"It was something I've never seen before," Brunswick police Detective William Moir told the TV station. "Some lobsters were loose on the ground from being spilled over so we went to work to save the ones we could."

The requested memorial would feature a picture of a lobster with the words "In Memory of the lobsters who suffered and died at this spot, August 2018." It would also urge people to "Try Vegan."

"Countless sensitive crustaceans experienced an agonizing death when this truck rolled over and their bodies came crashing down onto the highway," PETA Executive Vice President Tracy Reiman said in a statement. "PETA hopes to pay tribute to these individuals who didn't want to die with a memorial urging people to help prevent future suffering by keeping lobsters and all other animals off their plates."

On Thursday, the state Department of Transportation turned down PETA's request, citing safety concerns. In a letter to PETA, Jim Billings, the department's chief counsel, said development and signs of all types are prohibited along controlled-access highways such as US 1.

"Control-of-access areas may have a very high volume of car and truck traffic as well as a high speed limit that could create a potential hazard to motorists should development and signs be allowed in these sections," Billings wrote.

And Ted Talbot, the department's spokesman, also said PETA's plans wouldn't fly because it seemed like the animal rights group was seeking a permanent memorial, and that's not permissible under state law. Roadside memorials in Maine can only stay up for 12 weeks and can't be taller than 4 feet, he said.

CNN has reached out to PETA and is waiting to hear back.