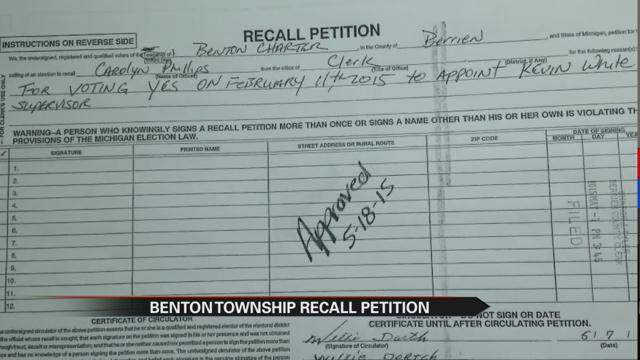 Tensions continue to rise in Benton Charter Township.  A taxpayer is working to get two township elected officials removed from office. Tuesday night the recall petition was already circulating.

Think of this as the second stage of the recall process.  Before this moves forward to a special recall election, where the public can vote, there needs to be a certain number of signatures.  In this case, that's 781, for each elected official attempted to be recalled.

He is working to get the nearly 800 signatures needed to get two elected officials out of office.

He says it all started when they voted "yes" to appoint Kevin White to township supervisor.

"They were going about it the wrong way, doing it behind closed doors, we felt like other people should have had a chance," says Dortch.

Boothby said, "A frivolous recall is both unfortunate and embarrassing. I voted for the person I believe to be best suited".

Phillips said, "It is obvious the organizers of this recall effort are not concerned with the township's best interests. Mr. White is doing a great job, with honesty and integrity".

The signatures need to be filed by the end of July to prompt a special recall election in November.