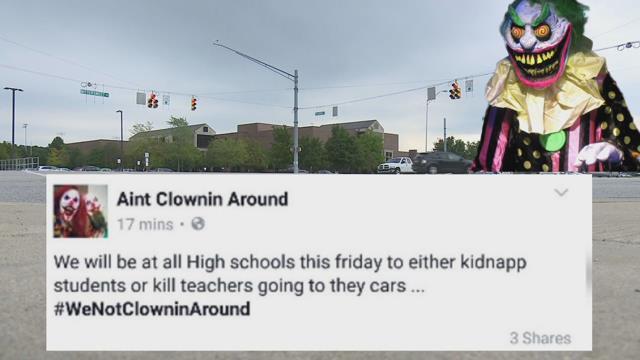 Penn-Harris-Madison officials say that it is not credible, but they are still taking extra safety precautions.

The clown threat that’s being shared on social media is from a group on Facebook called ‘Aint Clownin’ Around’.

In a post filled with errors, it reads, “We will be at all High schools this friday to either kidnapp students or kill teachers going to they cars…#WeNotClowninAround.”

“We believe it is a hoax,” said PHM Schools official Mike Seger.

“However, any type of threat that is made, especially one involving children we’re absolutely going to take it as being serious,” said PHM Schools Resource Officer, Donald Reppert.

So is School City of Mishawaka, who says they will excuse any absence tomorrow if parents want their children to stay home.

“Now this particular threat has been surfacing around the country,” said Seger.

There have even been some clown-related crimes in Indiana and Michigan.

Our affiliate station in Detroit reported that a boy says he was attacked by a clown with a knife two days ago.

Still, PHM Schools officials stress that they do not want people to freak out about the clown threat.

“It’s one that we believe is not credible,” said Seger.

PHM will have more police officers posted tomorrow throughout the district.