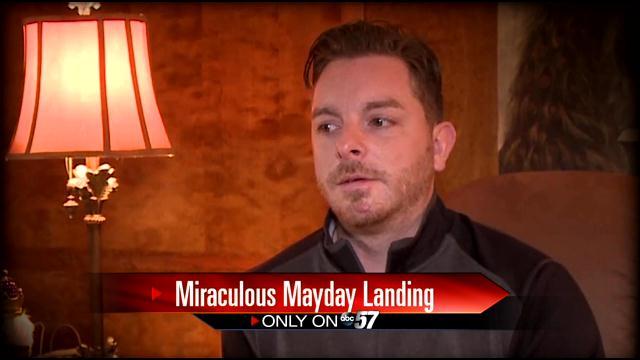 Four people survived a plane crash in Berrien Springs on the day after Thanksgiving. ABC57 went to Richmond, Indiana to check in with the pilot and his mother, who is in rehabilitation.

“Every time I close my eyes, it's like those images just keep coming back,” said pilot Bryce Fisher.

For Fisher, a trip on Black Friday to visit his grandmother in Berrien Springs quickly turned into a nightmare that keeps replaying in his head.

“I don't remember panicking. I don't remember thinking this is it. It was just complete tunnel vision in a situation like that. Between the engine dying and actually hitting the trees, we probably had 25 to 30 seconds,” said Fisher.

“If we had gone into the St. Joseph River, we would have drowned. I was trapped. She was trapped. So it was by the hand of God that we're alive today,” said Fisher.

Fisher obtained his pilots and mechanics license at Andrews University. He is thankful for the training he received.

And he believes the power cable between trees helped stop the Piper Comanche just in time.

“After the dust settled I just remember trying to listen is anybody else okay? And for the first minute I didn't hear anybody so it was really terrifying,” said Fisher.

Fisher's father Dr. William Fisher is 72 years old and even though he had several broken bones, he was up and walking around at the scene.
Dr. Fisher has been flying for 45 years.

“He with a broken back, pulls out my mom. And pulls out Miritha. When it came to me I was kind of trapped. And he was like, ‘Son, I can't do it,'” said Fisher.

Fisher says the plane landed upside down and his head was in the snow, but somehow, he didn't lose consciousness.

“I must have hit something on the instrument panel that was really strong and narrow because it impacted my tooth and broke my maxilla bone, my palate. They were like, ‘Do you remember swallowing your tooth?' And I was like, ‘No!' they didn't know until they took a CT scan that the tooth was in my nasal cavity,” said Fisher.

Fisher's girlfriend Miritha Morales suffered a broken leg. His mom had a broken hip and arm.

Fisher's mom, Barbara, is at the Acute Rehabilitation Center in Richmond, Indiana.

It was emotional for their family as they held hands.

Barbara said through the tears that she believes she's alive because she was praying when they crashed.

“Miritha, Bryce, Bill, and I, our hands are securely in the Lord. Can't be any other way,” said Barbara.

The Fishers are hoping for a Christmas miracle.

They are hoping to bring Barbara home on Christmas day.

Doctors said she should make a full recovery.