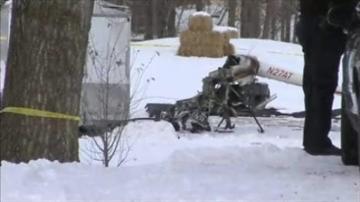 CORCORAN, Minn. -- A 68-year-old pilot walked away with just scorched hair after a scary landing Sunday as his family watched.

The Minnesota man often flies his personal helicopter to and from his son's house, but a routine trip for the holidays took a fiery turn for the worse.

When the helicopter started to rotate, the back end hit a trailer. Seconds later a fire burst out.

The son helped his father out of the burning chopper and said there was no match for the flames.

"Within a few seconds the fire started, I ran out with the fire extinguisher,” said Stefan Svard. “Got him out, we got his jacket off that was burning and like I said, ‘He's just fine’, but my fire extinguisher was no challenge, no match for 20 gallons of fuel."

The son said his father is an experienced pilot and believes a mechanical malfunction or possibly the cold weather caused his father's accident.

The FAA and NTSB are investigating.