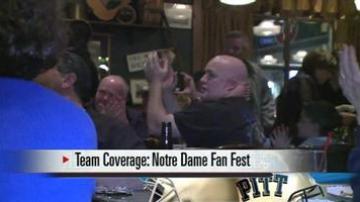 PITTSBURGH – The Irish officially invaded Pittsburgh as of Friday night on the eve of the two teams’ rematch under the lights.

ABC 57 stopped by the 2012 Fighting Irish Fan Fest thrown by the Notre Dame Club of Pittsburgh.

The traditional Irish pub was packed to the brim with Notre Dame Fans.
“We love when the alum come out and all the Irish fans. It’s always a good time and a great game,” said President Dan Pisaniello.

Two former Irish players made their way in to pep up the crowd.
Chris Yura ‘03 and Mike McCoy ’70 took the stage and got the fans ready for Saturday’s kickoff.

They even have some thoughts on how the team can walk away with the win.

“Hopefully tomorrow the team can put an offense and defense together at the same time seems like one’s been bailing out the other lately and we need to do that coming down the stretch with these teams before we play Stanford,” said McCoy.

The festivities at Mullaney’s Harp & Fiddle were planned until the early morning, which is alright with most fans since the game doesn’t start until 8 p.m. Saturday.

They just have one requirement.

“Tomorrow I don’t care what the score is one point or nine as long as they win,” said Uncle Lou, a lifelong Notre Dame fan.