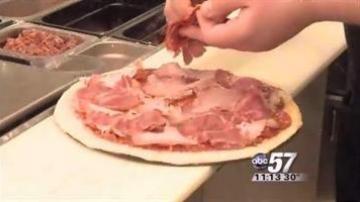 ELKHART COUNTY, Ind. --  The Goliath of the pizza industry is threatening to sue a local pizza shop.

DC's Pizza and Subs in Elkhart got a letter in the mail from Pizza Hut threatening a lawsuit.

DC's owner, Darren Cornell, said he was shocked when he received a letter in the mail from Pizza Hut's corporate office saying he couldn't call his pizza a "meat lover's pizza" anymore, because they have the term trademarked.

"We are doing pretty well. Well enough to scare the competition," said Cornell.

"According to them, they are registered trademarks of the Pizza Hut company," said Cornell.

Cornell thinks this is just a case of a corporate bully trying to assert it's power over his mom and pop pizza shop.

"They are strong arming me. If I don't change the menu within the allotted time then they are going to take whatever legal recourse they deem necessary," said Cornell.

The letter states Cornell has 60 days to comply, but Cornell said he has no plans of backing down.

"I plan on fighting them for it. They can't just go after me unless they go after every mom and pop shop that has a meat lover's pizza," said Cornell.

Cornell said his meat lover's pizza is the best and he deserves to keep the name.