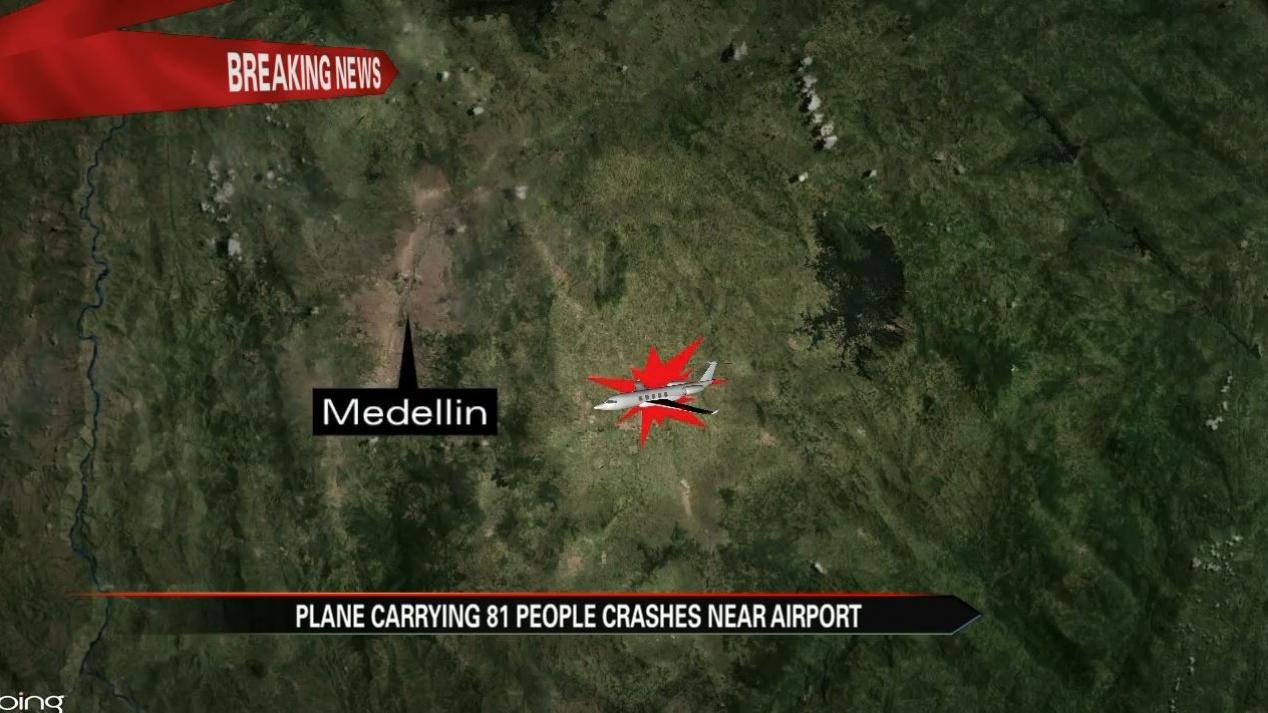 (CNN) -- A plane carrying 72 passengers -- including members of a Brazilian soccer team -- and nine crew members crashed near Rionegro, Colombia, according to the country's civil aviation department.

The accident happened in an area called Cerro El Gordo near Medellin, the department said.

The plane declared an emergency between the municipalities of La Ceja and La Union, according to a statement from Colombian aviation officials.

There could be six possible survivors, the statement said.

The plane took off from Bolivia's Viru Viru airport at 6:18 p.m. local time, according to Manuel Palamas, an air controller at the airport.

Officials didn't specify what happened to the plane but did say that the wounded were being transported to assistance centers.

But images of the incident show what appear to be damaged parts of the plane.

Tattered debris emblazoned with the club's logo was also photographed at the crash site.

Alfredo Bocanegra, the director of the Colombia Civil Aviation Authority, told CNN his organization is calling the incident an accident and not a crash at this point but did not elaborate.

The mayor of nearby Medellin said on Twitter that he is on his way to the accident site.

"The important thing here seeing that there might be survivors, it's saving lives. That's first and foremost," Mayor Federico Gutierrez said. "We're here supporting them on this very very sad story. They have our solidarity, so do their families, their friends, their countries. "

Satellite images show that scattered showers and thunderstorms have been present in the region over the last 12 hours -- though no big weather makers, according to CNN meteorologist Michael Guy.

There likely would have been turbulence in the region due to intermittent thunderstorms and winds from around the mountains in the region, Guy says.

A statement from nearby Jose Maria Cordova airport says the accident site can only be accessed by land because of weather conditions.

The Colombian Air Force had to abort a mission to the accident site due to inclement weather, according to Colombian officials.

From Cinderella story to nightmare

Chapecoense was due to play the Colombian club team Atletico Nacional in the the first leg of the South American cup Finals on Wednesday.

The team, which is ninth in Brazil's Serie A league, has surprised many with its performance in the tournament this year -- ESPNFC billed their semifinal contest as a David versus Goliath match.

The team said in a post on its Facebook page that it was waiting for an official announcement from Colombian aviation authorities before issuing its own statement about the crash.

The lesser-known club was founded in 1973 and has steadily risen up the ranks in recent years.

Team officials like to say that they've succeeded due to good management and a strategic vision, says Plus55, a Brazilian news site.

"Few remembered the name of this forgotten team," CONMEBOL said of Chapecoense. Now the whole continent knows it."

The team, whose stadium wasn't even big enough to host a final by CONMEBOL (the governing body for soccer in South America) regulations, was vying to become the first Brazilian club to win the South American Cup final since 2008.

Nacional tweeted it "deeply regrets and is in solidarity with Chapecoense for the accident that occurred is awaiting for more information from the authorities."

CONMEBOL said in a statement that it has been notified about the accident and has suspended all confederation activities.

Its president, Alejandro Dominguez, is on his way to Medellin, the statement said.