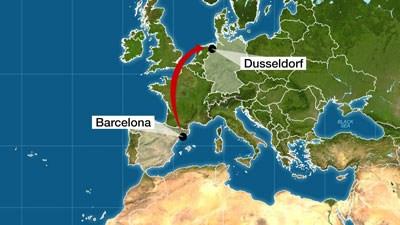 It was carrying 142 passengers, two pilots, and four crew members, according to ABC News.

The jet belongs to the German low-cost airliner, German Wings.

It was believed to be flying from Barcelona to Dusseldorf.

President Francois Hollande said there are "apparently no survivors."

The plane crashed in the French Alps region new the town of Digne.

The President said he wants to "express my solidarity to the family of the victims. We do not yet know the identities of the victims. It is mourning we have to go through because it is a tragedy that has happened on our soil."

According to the flight tracking website Flightrader24, the flight climbed to 38,000 feet before it started to descend.

The twin-engine Airbus A320s began operation in 1988 and is considered one of the most reliable air crafts.

Crashes like these are not very common because crashes typically happen either near take off or landing.