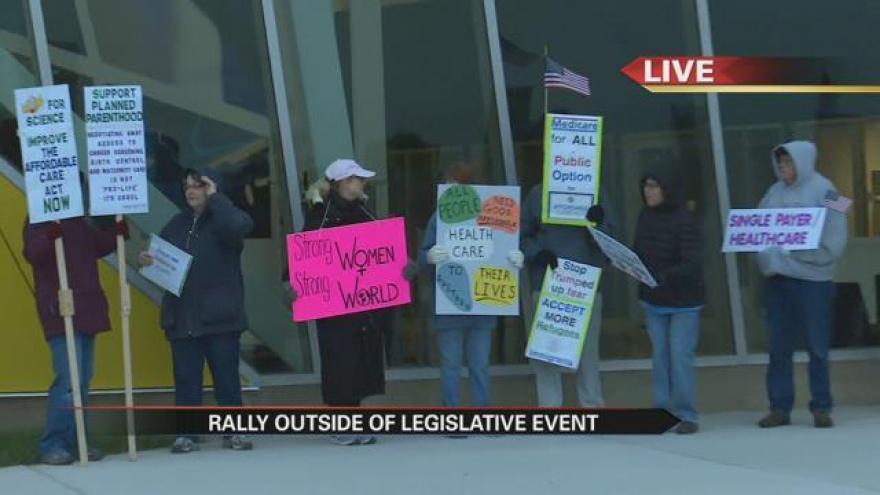 Early Friday morning, supporters of the Affordable Care Act and Planned Parenthood gathered outside of the Hanson Technology Center at Lake Michigan College in hopes of getting lawmakers attention ahead of a legislative event.

The rally is in response to the Republicans still working on ways to pull back on benefits of the Affordable Care Act and President Trump signing legislation that would allow states to defund Planned Parenthood.

The 7th annual Sustainability Issues Legislative Breakfast includes a panel discussion among local elected officials. Each panelist discusses their current legislative interests and the state of sustainability policy in the Great Lakes, Michigan and the U.S.

Supporters held up signs outside of the Hanson Technology Center on campus, some reading 'All people need good affordable health care to sustain their lives" and another with a photo of Fred Upton that was labeled "Missing Person."

"I myself am in that age group of the 50 to 64 year olds that could be really impacted by the new Republican healthcare proposals," said Karen Laetz, an Obamacare and Planned Parenthood supporter.

Laetz has also rallied in front of Upton's office and had a 30 minute meeting with the congressman.

"He did a lot of listening and he did tell us he supported pre-existing conditions, but we want them to see what we have to say about ACA and Planned Parenthood," Laetz said.