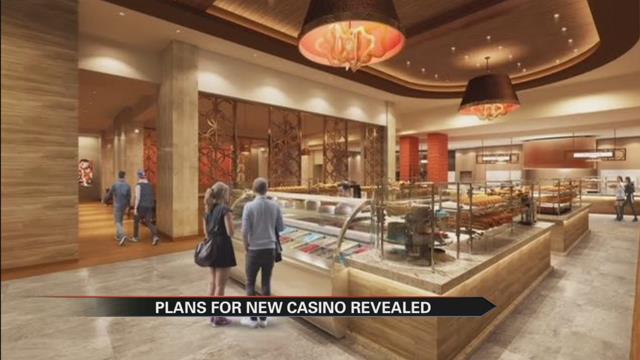 Construction is underway for Michiana’s newest Four Winds Casino, and on Wednesday city leaders joined the Pokagon Band of Potawatomi Indians for an unveiling of what’s in store for South Bend’s first casino.

If you build it, they will come.

At least that’s what Four Winds Casino officials are hoping for, with the first phase of Four Winds South Bend set to be complete by early 2018.

It’s a Field of Dreams that has finally come true for the Pokagon Band of Potawatomi Indians.

This morning at Four Winds Field, I got the first look at what’s been years in the making for South Bend and the Pokagon Band.

1800 Class II gaming devices, 175,000 square feet, and 1200 new jobs are just some of the features announced at Wednesday’s unveiling.

Four Winds Chief Operating Officer Frank Freedman says the casino will open up with a home run right out of the gate.

But it’s not always how you start.

Sometimes, it’s how you finish.

“What we’ll continue to do is design a potential phase two and clearly a potential phase II should include a hotel, a meeting room space, banquet space, maybe entertainment space, it’ll be up to the owners as to when we would pull the trigger on something like that and well help guide that process basically by analyzing once we get the doors open, ok how does business look and feel,” said Freedman.

And if your someone looking for a possible job at the newest Four Winds Casino right here in South Bend, officials say to keep an eye out for information about job and vendor fairs as construction progresses.