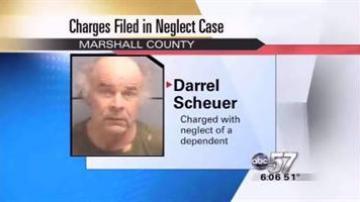 PLYMOUTH, Ind. – A Plymouth man is faces charges after police found his disabled wife stranded on the floor of their home. Police arrested 61 year-old Darrel Scheuer on Wednesday. Police said his wife had been lying on the floor for about 30 days.

Police were responding to an Adult Protective Services report of a disabled female being neglected.

Police and an APS representative did a welfare check on Wednesday, March 21st, which is when they found the woman on the ground.

Police said she was dehydrated and hadn’t eaten. She was also suffering from a mental disability.

The woman was taken by ambulance to a hospital.

After waiting for a warrant, police arrested Scheuer on the morning of Wednesday, March 28th.

Neighbors said they woke up to the noise of knocking at a door and heard screaming.

The next-door-neighbors to Scheuer said they had just moved in a couple weeks earlier, and didn’t even know anyone else lived in the home.

"We were pretty much surprised because he never told us and we never even knew that she was there until the ambulance came and took her," said Carlos Cornejo.

Scheuer is being charged with neglect of dependent and resisting law enforcement.