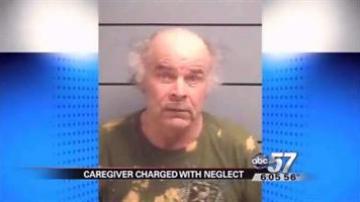 Police said that 61 year-old Darrel Scheuer left his disabled wife stranded on the floor of their home for nearly 30 days!

Officers from the Plymouth Police Department went to the North Street home for a welfare check after receiving a report from Adult Protective Services.

When they arrived, Scheuer would not allow allow them in the home to check on his wife. After explaining that it was for her safety, he allowed them to come in.

Police found her on the floor in a back bedroom of the house. Police said there was a bad smell in the room.

Scheuer said the last time she had eaten was four days ago when he fed her some cottage cheese.

Officers said she was covered in infected sores and was badly dehydrated. They called the Plymouth EMS and had her taken to the hospital for treatment.

The Prosecutor's Office has filed the following charges:

Scheuer is being held in the Marshall County Jail.

He will be arraigned on Tuesday, April 3, at 9 a.m. via video conferencing.