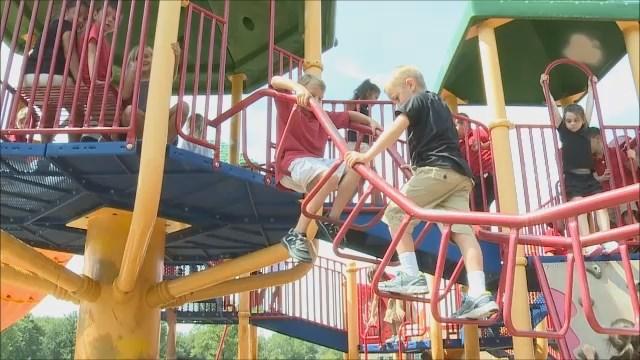 Plymouth school leaders responded immediately after vandalism was reported on one of their school playgrounds.

Students at Washington Discovery Academy were disappointed to find out their playground was vandalized.

“It makes me very angry they’re doing that to our playground,” said Cotton.

“In the evening I got notification from multiple staff members and then a couple parents that they had seen a Facebook post about profanity that had been written on the playground,” said Jeff Spencer, the Principal at Washington Discovery Academy.

Once the school principal was notified of what happened, he acted right away.

“I alerted our custodial staff just to let them know so that first thing this morning we could clean that up,” said Spencer.

And that’s exactly what they did. Although staff isn’t sure yet of who vandalized the property, they looking into it.

“We do have video cameras and we have security measures in place,” said Spencer

“Our security will be involved but you know if we caught the same kids doing it 3 or 4 times in a row or event twice in a row we might get the police involved then” said Dan Tyree, the Superintendent for Plymouth Community Schools.

And as far as the students go, they can play on the playground again now the problem has been fixed.

"It’s been cleaned and it is operational so the students will be back on it,” said Spencer.

The school superintendent says he isn’t worried about it becoming a consistent issue but that if it does, they will take the necessary steps to prevent this from happening in the future.