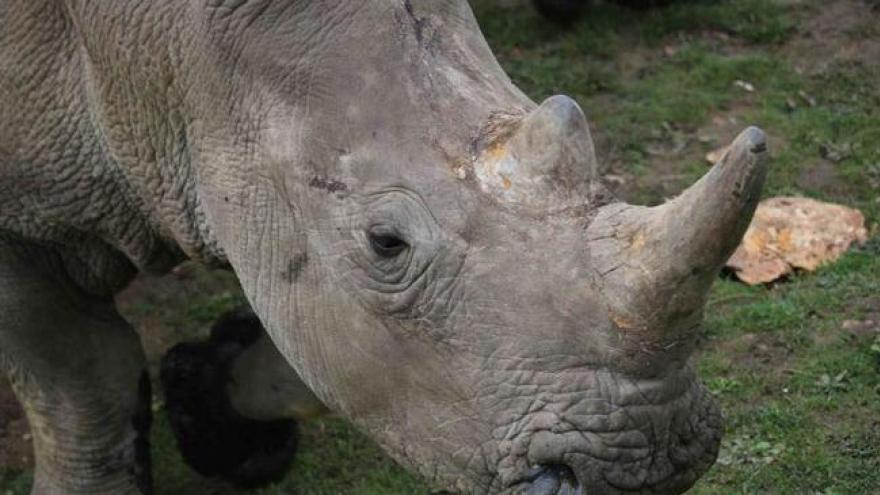 (CNN) -- A rhino is dead after poachers sawed off one of its horns at a wildlife preserve in the suburbs of Paris.

The poachers broke into the Thoiry Zoo on Monday night, forcing an outer gate and several doors open before shooting and killing the rhino, the preserve said in a statement on Facebook.

"They shot dead Vince, a 4-year-old male, to cut one of its horns, probably with a chainsaw," it said. "Its second horn was partially cut, which left the impression that the criminals were disturbed or that their equipment was defective."

The Thoiry complex includes a zoo and a drive-through wildlife preserve, where rhinos live in a fenced enclosure. Two other rhinos, named Gracie and Bruno, were unharmed.

"The whole staff is extremely shocked," the preserve said.

Vince was a part of the Southern white rhino subspecies, and because they are considered extremely endangered, reproduction and conservation in zoos is essential.

All five rhino species are on the endangered list and are often the victims of poaching because some people believe their horns have medicinal properties. In 2015, 1 kilogram of rhino horns was sold on the black market for 51,000 Euros.

Illegal wildlife trading is one of the largest illegal trades in the world, after drugs, counterfeiting, and human trafficking.

CNN's Margaux Deygas and Maud Le Rest in Paris contributed to this report.