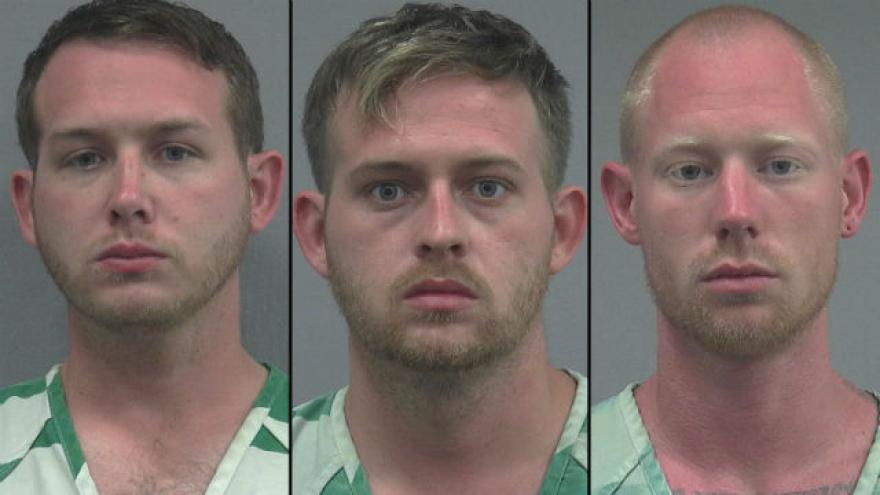 (CNN) -- Police in Florida arrested three men who allegedly made Nazi salutes, repeated Hitler chants and then shot at a group of protesters after white supremacist leader Richard Spencer's speech at the University of Florida on Thursday.

The gunshot narrowly missed the group of six to eight protesters, striking a business behind them, police said.

Tyler Tenbrink, 28, William Fears, 30, and Colt Fears, 28, had driven from Texas to Gainesville, Florida, for Spencer's speech at the Phillips Center.

The Fears, who are brothers, spoke to CNN on Thursday prior to the incident about their support for Spencer, the white supremacist leader of the "alt-right." In one interview, William Fears said protesters did not need to be afraid of them.

"They don't have to fear us. It's always the left that brings the violence," he said.

Colt Fears said he agreed with about 75% of what Spencer says. And in an interview with The Washington Post on Thursday, Tenbrink said he came to Gainesville to support Spencer.

Gainesville police spokesman Ben Tobias said Friday that he thought it was "reasonable to believe they came here to bring some hatred."

Spencer, who advocates for a white-ethno state, arrived in Gainesville on Thursday to deliver a speech on his views at the university. The controversial event brought out a large number of students and community members protesting against the speech, as well as a much smaller number of Spencer supporters.

The three men were all charged with attempted homicide, and Tenbrink was also charged with possession of a weapon by a convicted felon.

Attorneys for the defendants did not immediately respond to a request for comment.

The incident began shortly before 5:30 p.m. Thursday, about an hour after Spencer's speech ended, when the three men allegedly drove up to a nearby bus stop in a silver Jeep, according to police. They began threatening and yelling what the police report described as "Hail Hitler," and other chants at a group of protesters..

An argument ensued, and one person in the group of protesters used a baton to hit the rear window of the vehicle. At that point, Tenbrink left the vehicle and pulled out a handgun, the police report said. Both Colt Fears and Williams Fears yelled at the victims "I'm going to f***ing kill you" and were also yelling "kill them" and "shoot them," according to the police report.

Tenbrink allegedly fired at the group of protesters, police said. The three men then got back in the vehicle and fled the scene, police said.

One victim called police and "amazingly" recited to them the license plate number, police said. An off-duty deputy with the Alachua County Sheriff's Office who was heading home after the event located the suspects' vehicle shortly before 9 p.m. about 20 miles north of Gainesville, according to authorities. Units from two police departments and the Florida Highway Patrol conducted what was described in a police press release as "a high-risk Felony stop" on the suspects' vehicle.

Police recovered "at least two" handguns from the vehicle, according to Gainesville police spokesman Ben Tobias.

Tenbrink admitted that he was in the vehicle at the time and was the shooter, according to a police report.

The community had taken considerable steps to prevent violence at the Spencer event.

On Monday, Florida's governor declared a state of emergency to provide resources to law enforcement, and an extensive police presence was on campus for the event. University of Florida Pesident W. Kent Fuchs estimated that security costs were upward of $600,000.

"Yesterday, people from outside of our community came to create violence and disruption," police spokesman Tobias said Friday. "They came to bring hate to our city, yet the people of Gainesville showed them exactly what our town is all about."

The Fears brothers were in Alachua County jail Friday under $1 million bond each, and Tenbrink is in jail under a $3 million bond, police said.

Spencer previously helped organize the "Unite the Right" rally in Charlottesville, Virginia, at which heavily armed white nationalists fought with counterprotesters in a bloody day of violence.

There, a man described as a Nazi sympathizer drove a vehicle into a crowd of counterprotesters, killing one woman, according to police.