Police baffled by theft of headstones from local business 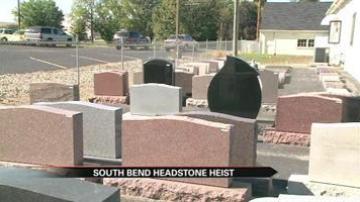 SOUTH BEND, Ind. -- South Bend Police are baffled by the theft of four granite headstones from Carl Kay Memorials over the past few weeks. Each headstone weighs hundreds of pounds.

Carl Kay and his wife have been running Carl Kay Memorials together for 38 years. In their work, they help families remember loved ones and honor fallen heroes.

In all those years, they never worried about securing their granite - until recently.

In the past two months, four headstones have been stolen.

They say this summer's road construction had something to do with it.

"We've always been protected by a fence. We've had a fence and gates, but now that the city had to take our fence down for the expansion of Barbie Street. We were completely exposed," said Carl Kay.

"Under the cloak of darkness, on two separate occasions now, somebody, or some individuals have come and removed at least four monuments," said Captain Phil Trent with the South Bend Police Department.

Every cubic foot of granite weighs about 200 pounds, so the monuments weigh anywhere from 400 to 500 pounds.

Police say it would take two strong men to move them.

"It's heavy lifting, so it's not a one person job," said Trent.

Stealing one is no small effort, so how the monuments were stolen is a bit of a mystery.

Regardless of how they were stolen, Kay just wants them back.

He says his customers are waiting for the gravestones.

"We did get the replacements in so we're working hard to get the lettering done and get the stones to the cemetery prior to this weekend," said Kay.

The fence that had to come down for road construction was just put back in place on Wednesday.

Kay says south bend police have also increased their patrols to the area.