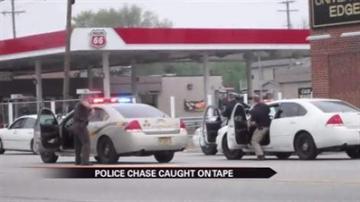 ROSELAND, Ind. --  What started as a hit and run on State Road 23 and 30th Street, ended in a high speed chase.

Witnesses say around 2 p.m. Saturday, the driver of a white Lincoln Continental refused to pull over for several miles.  Lonny Doolen shot video of what happened when the driver finally stopped the car.

Police said the suspect was given numerous commands, and was not cooperating with them. So they had to approach the situation with a lot of back-up and force. They said situations like this can often turn violent so they tried to prevent it at all costs.

The suspect is in St. Joseph County Jail.  He is being charged with D.U.I. and fleeing the scene of an accident.