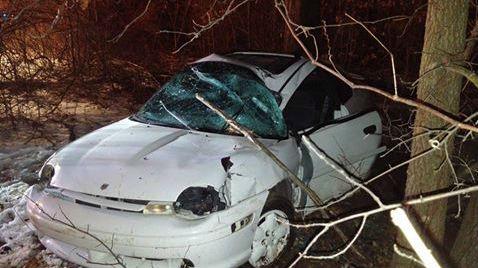 Police say they were called to a home in the 1100 block of Edison Rd. in Osceola around 2:30 Sunday morning for a disturbance call.

When they arrived on scene, Butt allegedly got in his vehicle and sped west on Edison. Officials say their vehicles reached almost 100 mph while in pursuit.

The suspect's vehicle went off the road when he hit a sharp curve near Day Road, hitting a tree and cutting the power line.

Officers say Butt then got out of his vehicle and fled into the woods on foot.

The Mishawaka K-9 unit found him a short distance away within an hour of the car chase.

The other suspect, Benjamin Nettrour, was not in the vehicle but he is also facing a felony charge for breaking into the home.

Police say the caller reported the two men came to the home intending to start a fight.